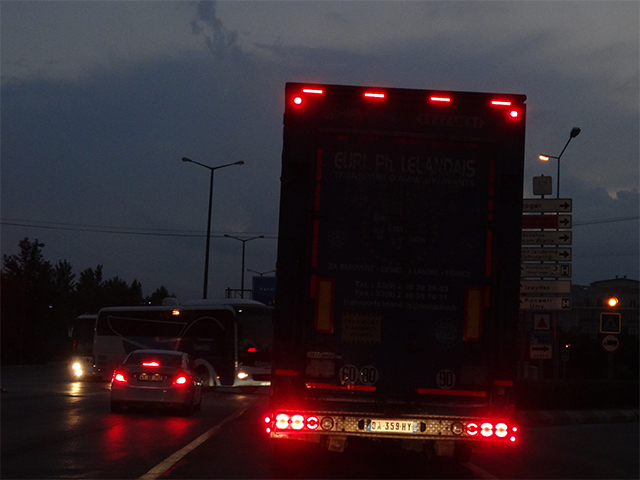 Animals‘ Angels follows the French truck to which Jaro (a dead calf; see our report from July 4) and the others have been reloaded.

At a gas station we finally get a chance to check on the animals. The French bull calves are loaded on 3 decks. Some of them have thin-sunken flanks. The ceiling height is too low. Next to Jaro we see another calf lying huddled up – we call him Emil. Emil is severely emaciated and soaked with sweat. He breathes rapidly and shallowly. As we inform the drivers and the buyer of the animals (who is attending the transport as well) we only get in response statements like “Hayvan kaput normal” (dead animals = normality). Of course we want to follow the animals to their final destination to find out what is going to happen to Emil and the others. But the buyer does not allow us to watch them being unloaded at his farm.

After this, the situation starts to get ludicrous: As we check again on Emil during another stop, one of the drivers grabs our cell-phone and throws it into the truck’s second loading deck. He then climbs inside and entrenches himself there for more than 15 minutes to delete the pictures we took of Jaro and Emil. Afterwards, he hurls away our phone at the parking lot. His behavior reveals how burdening the animal transport business really is – even for the drivers. The daily madness at the Bulgarian-Turkish border does not spare them. There is nothing “normal” here, neither for humans nor animals. But the great difference is: the animals do not have a choice. They are exposed to such exertions and suffering – they even die from it.