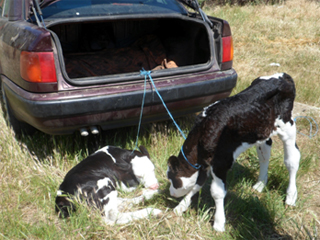 Tasnad is a small town in the North West of Romania. The animal sector of the market was approved last year.

The problems are the same as noticed basically at all markets: pigs are grabbed by their legs upside down and put into sacks. Calves are tied up by their legs and transported in car trunks. Cattle are transported in closed vans. They are loaded in a rough way, beaten and their tails are twisted. Animals are left in the blazing sun for hours without any water or shade.

Animals’ Angels sent various letters of complaint until the competent authorities carried out an official check at the market last February. Eventually they informed Animals’ Angels that the local administration was given a time limit to comply with the legislation or otherwise the authorization of the market will be suspended.

The deadline expired and the inspectors of Animals’ Angels witnessed that nothing has changed. Pigs are still handled brutally, chickens with their legs tied up are left on the warm concrete. With their beaks wide open they struggle fluttering and breath difficulty. Even unweaned calves with not yet healed umbilical cord are exposed in the sun for at least three hours without the possibility to move adequately and to drink.

Animals’ Angels will claim the suspension of the market’s authorization.