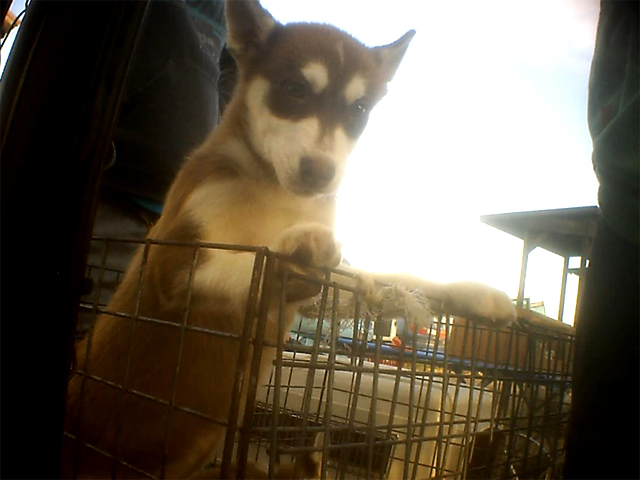 The team of Viva! Interwencje, on behalf of Animals' Angels, assists a crew of the Danish TV channel DR in an investigation into a market in Słomczyn, close to Warsaw. For decades, the market is renowned for the illegal sale of puppies. Recently, the breeders have found a way to bypass the existing law and sell the puppies at the market almost legally. The objective of the investigation is to find out how difficult it would be to arrange for a large, illegal purchase of puppies from Poland to Denmark.

The conditions of the sale are horrific, the dogs are stuffed into tight cages, most of them without water and food for at least 4 hours plus transport time, with breeders coming from all over the country. Most of the more than hundred puppies are weak, bearing symptoms of parasitic invasion, illnesses, and in many cases are too young to be sold and transported. They lie in cages, on top of each other, barely moving. The market also sells poultry, rabbits and goats in horrific conditions, tucked in small cages, without water and beyond veterinary supervision.

One of the team members and the host of DR's programme enter the market posing as smugglers – intermediaries in such a trade. They ask the breeders about the possibility of buying large quantities of puppies. The answers are striking. Some breeders offer every number of every breed of dogs, and in addition they promise to arrange for passports that would certify that the puppies are older than in reality and are fit for being legally transported.

One of the breeders claims that in order to save up on passports, the safest way is to just put the dogs into the trunk of a car and cross the borders while avoiding police controls. The breeders themselves say that many puppies at the market might be infected with viral diseases, but they do not seem to have any problem with that.

Such outcome of the investigation suggests that there certainly is a problem with illegal puppy trading and the perpetrators are not afraid of any punishment. The team contacts the local veterinary service to signal the problem. The leads acquired in this investigation will be pursued on.