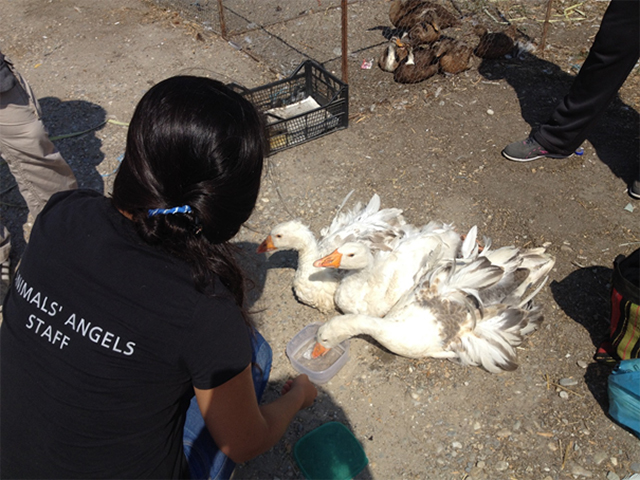 Early in the morning, an Animals’ Angels team arrives at Calugareni Market to check the animals’ situation. Despite not having the necessary approval of the county veterinary office, the market takes place every Sunday on municipal property ever since. It is one of the most popular in the area and, according to the town authorities, it joins over a hundred of farmers not only from Calugareni but from different villages as well.

There are roughly 70 vehicles full of animals – pigs, calves, sheep, goats, cows and a hundred boxes and pens, often overcrowded with ducks, chickens and rabbits. People are holding piglets by their back legs, carrying poultry by their wings and tying goats to the cars by their horns. This rough and violent handling causes pain to the animals and it is even illegal according to the EU regulation.

At the market we also witness the public killing of Sarah and Fadilah –  two sows we could not help despite a veterinarian and the police being present. Unfortunately, the police officers were not around at that moment but the veterinarian warns the killer that it was prohibited and he was going to penalize him. But when he asks for the man’s ID he refuses and escapes. The problem at this market is that the people feel to have the right to continue their violent traditions without being willing to change their habits.

Later in the morning, as temperatures start to increase, the vendors begin to leave the market. Some birds are still lying on the ground with their legs and wings being tethered. We are even told some of them had been lying there since the night before. Since there is not even one tap at the market, we buy bottles and water the geese, ducks and chickens being visibly thirsty, hoping to teach to the people that animals have our same needs. We also offer water to Gabi, a young, diffident calf and to Gigi, a billy-goat who has been left in a cart under the blazing sun for more than an hour after the market ended.

After the market visit, the team meets with the competent authorities and complains about the systematic violations of the animal protection laws taking place at Calugareni market. Animals’ Angels received some good responses and will remind the promises made by the involved institutions to start changing the mentality of people towards animals at Calugareni market.