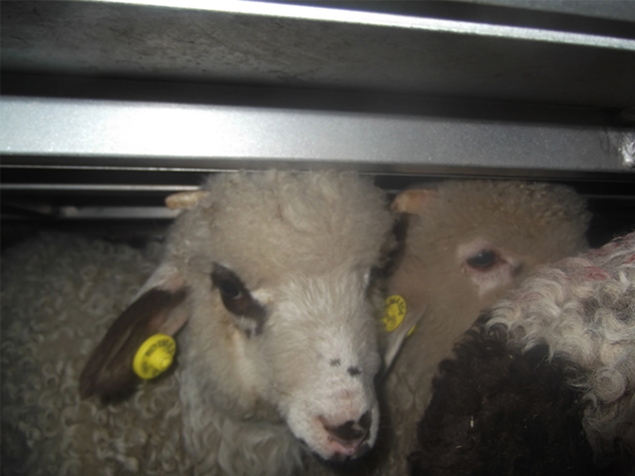 Animals’ Angels is on highway A13 near Padova when the team spots a truck with lambs in the opposite direction. It’s an enormous truck in which animals are loaded on five decks. As Animals’ Angels has already been calling the authorities not to allow transports on four decks as there’s not sufficient height for the animals, the team do not trust their eyes.

When the truck stops before Bologna, the investigators see immediately that the lambs on the lower deck are compressed and there’s not any space between their heads and backs and the ceiling. They are not only exposed to the risk to get injured hitting the ceiling during the truck’s movement, but also to slip (as there’s not adequate bedding) and possibly hit the chains and protrusions inside the vehicle.

The water system is turned on and all the lambs lick and bite the nipples but are not able to drink, it looks as they don’t know how to use them. Some press them, but the resulting the water jet is too strong making them back off. The lambs remote to the two nipples just lick the bars or the side of the truck and cannot move to reach them as density is high inside the compartments. These young animals have been travelling in such stressful conditions from Northern Romania to central Italy, facing 1.750 km.

Animals’ Angels at this point asks the intervention of the police to avoid that such transports will be again given clearance in the future. The transporter is issued fines for several irregularities. The Romanian authorities are informed as well and asked to intensify their checks until Easter.