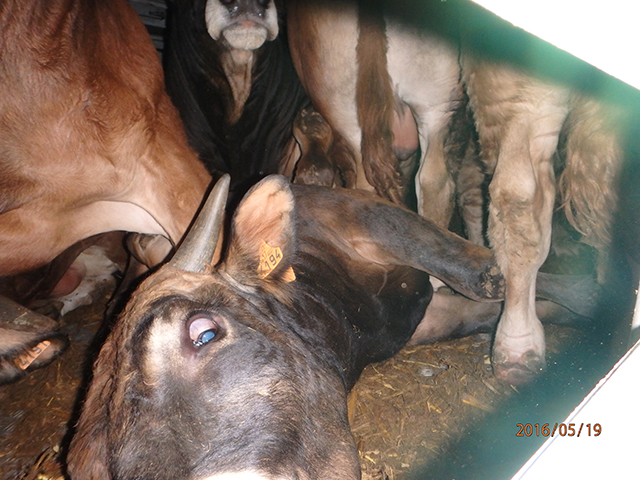 ANDA and Animals‘ Angels check transports of young bulls going from Spain to Morocco for slaughter. The transports come from North Spain and are embarked at Algeciras port onto a ferry to Tangier.

The trucks are loaded into the lower deck of the vessel where the air is very dense. The animals soon start breathing heavily and sweating. None of trucks carries food for the animals, the loading density is much too high in some compartments. The situation for the animals is particularly bad in one truck in which young bull Carles fell down and cannot get up anymore. Carles is exhausted.

Due to the lack of space, the other animals are trampling on him, on his face, legs and belly, but Carles does not move. Later, the same happens to another bull, Cris. The customs clearance at Tangier port takes more than three hours. Carles and Cris are still lying on the floor.

During a stop at a gas station in Morocco, the drivers finally try to make them stand up. Before we can intervene, they poke them repeatedly with an electric prod including in their faces. Carles, forced by the electro shocks, gets up. Cris remains on the floor. Four hours later, the animals finally arrive at destination. Cris and Carles can walk off the vehicle.

The stables are modern, clean and well equipped for the animals. However, the owner explains proudly that he is importing „live meat” from Europe. This is exactly the impression the team had while trailing the trucks. The animals are not treated as living beings but as if they were goods.

ANDA and Animals’ Angels will keep fighting against this and will certainly file official complaints against the Spanish transport companies.