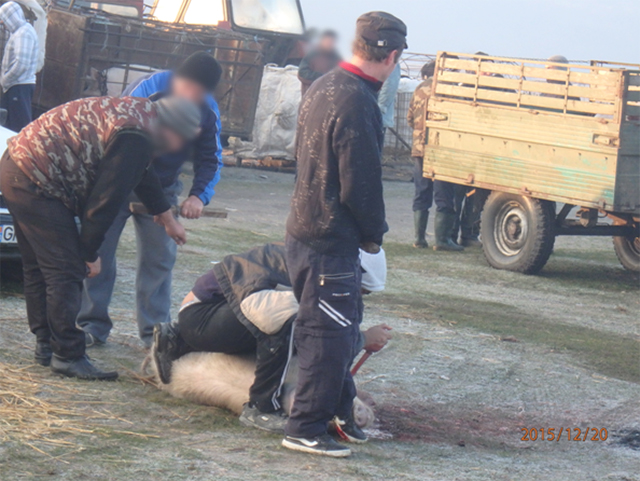 It was 2003 when Animals’ Angels first met the pigs of Calugareni, in Romania, discovering a national tradition called 'the cutting of the pig' that falls on the 20th December, before Christmas, on the day of Saint Ignatius. In 2007, Romania accessed the EU falling under the obligation to comply with the respective legislation concerning as well the minimum requirements for the protection of 'farm' animals.

Despite 12 years have passed, today the investigators had the painful feeling to be back to the past and that nothing has changed. A massive killing of pigs took place the whole day, in the yards of the houses and at the local market. The association of meat producers said in an interview that around 400.000 pigs are killed by private persons for Christmas.

This means a day of huge suffering when these curious and intelligent animals are dragged by their legs, tripped on their side and then four or five people sit on them and bloc their limbs and tie the upper jaw with a metal wire. Then one man takes a small ordinary kitchen knife and starts cutting the throat with several cuts. The poor animals kick and struggle while suffocating in their own blood. It takes several minutes that must be endless for them. Animals’ Angels is determined to fight for the end of this medieval barbarity.