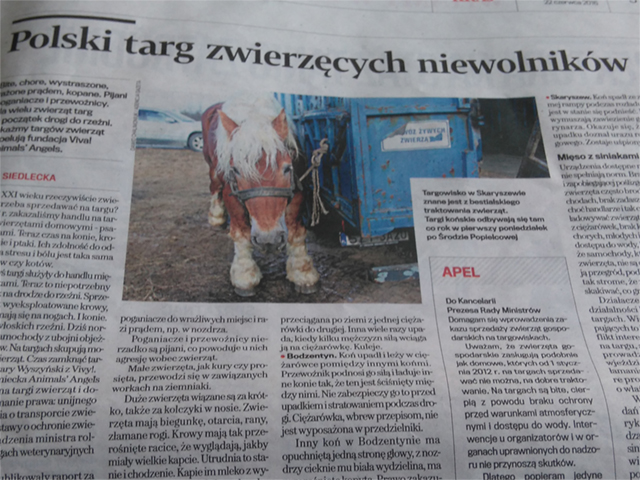 One of the biggest polish daily newspaper, on it' second page, prints an extensive article titled 'Polish Markets of Animal Slaves'. The article broadly describes the problem of animal markets and quotes many examples of animal suffering given in our market report. It provides photos taken at animal markets and prints our appeal to the ministry along with a link to the polish petition to close down animal markets. This topic being treated so seriously by one of the biggest daily newspaper in Poland is a huge step forward for the welfare of animals suffering at animal markets.

Some days before, another of Poland’s largest daily newspapers, Rzeczpospolita, prints an article about animal markets and the findings in our report. The article also features a statement of polish CVO’s office, claiming that the report shows illegal situations and will be subject to careful analysis. In the article, we also find a statement of Bodzentyn city council, saying that many improvements have already been made. A member of Viva! Interwencje also discusses the problems on live interview via the newspaper's online TV channel, also critically commenting on the authorities’ approach to the market issue and the statement of Bodzentyn city council.