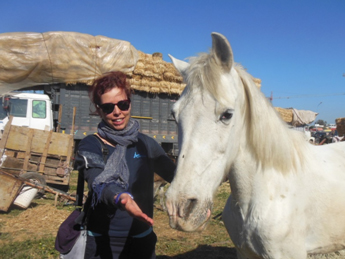 Animals‘ Angels inspects four markets, transports and the conditions for slaughter in the region of Rabat – Salé – Zenmour – Zaer and in the area of Casablanca.

The conditions for the animals are horrendous: Everywhere the team spots emaciated horses and donkeys forced to carry and pull heavy loading. Many have sore-rubbed shoulders and sides and don’t even get enough water. Besides, many extremely thin cattle and sheep are grazing all alongside the highways. Most of them are tied together at their forelegs so they can only make small steps.

At the markets the animals simply lie on the ground with their legs tied together. Their noses and eyes are full of sand. Others are tied to each other, unable to move for hours. The team observes cattle being tethered in front of a slaughterhouse for hours. The ropes slung across their horns force them to keep their heads down. Sick and wounded animals are simply parked, nobody cares about them. The slaughter methods are medieval. Only three modern slaughterhouses for larger animals exist throughout Morocco.

‘Farm’ animals play a big part in Morocco. Many families live with and on them. However, it seems as they are not recognized as sentient beings but as “one foodstuff more”. The team experiences the people in Morocco as very friendly, courteous and helpful. But simultaneously it seems as they have no compassion for animals.

As so far there is no profound animal welfare legislation in Morocco, Animals’ Angels will take a stand for one coming into effect.