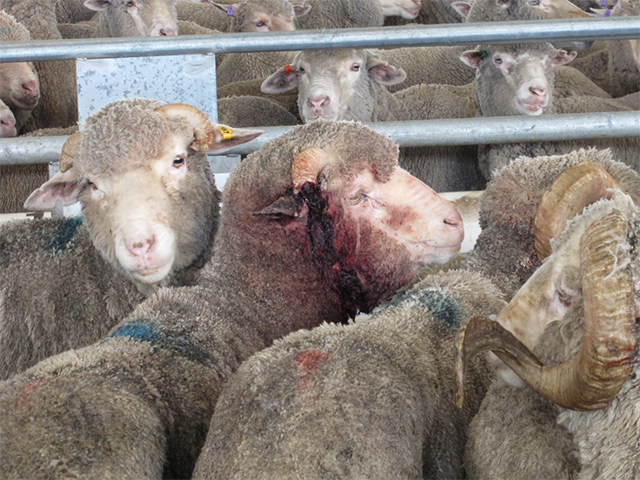 Animals’ Angels attend the yard today where over 10.000 sheep are for sale. It is fine and reasonably warm in the sun but under the roof of the facility it is very cold. We are told all the sheep arrived the day before and some appear to be very cold, especially those who are older and thin. The water is still not running through some green troughs or the pipes in the sale pens, as there is an issue with funding, so we will write to the Council CEO asking for it to be repaired without delay.

We observe 15 sheep who have been placed in a pen because they are not fit to sell and transport, and note another 4 have been identified by staff in sale pens as unfit. The 4 are taken to join the 15. We also find a sheep in a sale pen with an eye condition causing that we believe is causing the animal pain.  The yard management remove him and he is placed with the others. Sheep suffering what seems to be dermatitis is in a pen on his own separated from another three who seem to be recovering from the same skin disease. In one particular a pen are approx 6-8 sheep, some of which have had their horns cut back drastically by the owner probably on the farm. A thick blood trail can be seen on the side of their head, because the tissue and vessels have also been sliced. We are of no doubt this would have been very painful and the way the horns were cut is not in compliance with the Code for sheep in WA. We will report this to authorities.