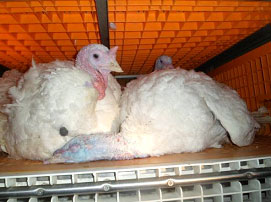 Animals’ Angels observed a transport of turkeys. There were many feathers flying out of the truck, wings were trapped outside the cages. The Police immediately stopped it and checked the animals: many turkeys had blood on their feathers but it was not possible to inspect each individual also because the driver had not a ladder; there were three dead turkeys of which one was already cold and stiff, another one had a big necrotic wound on his back. Two turkeys had a wound at their feet, another had an open wound on his back. A turkey had one of his feet trapped under the door of the cage: the Police asked the driver to set him free and so he did. Temperature was -2 C degrees. There were no curtains on the sides of the truck. Turkeys were nervous. The veterinarian decided that the truck should have gone to its final destination. The Police imposed a fine of around 5000 euro for the missing ladder, inadequate crates, undue sufference.