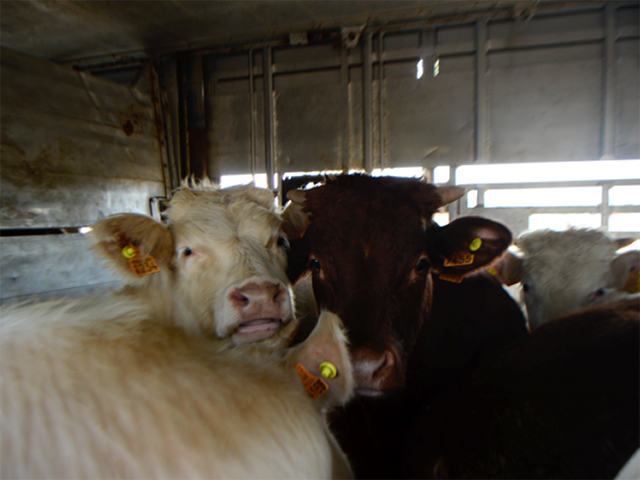 Animals’ Angels monitors the route Bulgaria – Turkey where dozens of trucks per day transported 30.000 heifers and young bulls for fattening in 2014. The animals come from ten different EU countries.

The European Court of Justice recently ruled that the requirements of Regulation 1/2005 must be respected by EU transporters also when entering non EU territory. Particularly rest periods and watering and feeding times must be complied with also when exiting Europe.

The teams trail four trucks with young bulls coming from Czech and Slovakia and stay with them until destination, in Kirsehir, Eastern Turkey. After crossing the Bulgarian border, the animals remain in the vehicles for 10 hours during Turkish customs procedures, travel for 10 more hours and again wait more than 20 hours for more customs checks, without food and rest.

Bulls are very resistant and apparently remain strong and healthy during long travels. Though, a practised eye recognizes some alarming signals through which cattle talk. During waiting times at the second customs, some animals lie down curled up and visibly exhausted, others stand up for insufficient space and play with their tongues, bite and lick bars, the walls of the trucks and body parts of their companions in an abnormal and repetitive way. Oral stereotypes indicate frustration due to excessive confinement and insufficient ruminating. Added to the impossibility to rest and adequately drink due to high density, the discomfort and diseases coming from a lack of hygiene due to increasing dung and urine amount; this is called suffering.

Animals' Angels calls on the European Commission to take action so that European principles protecting animals as sentient beings are respected and do not remain only words on paper.