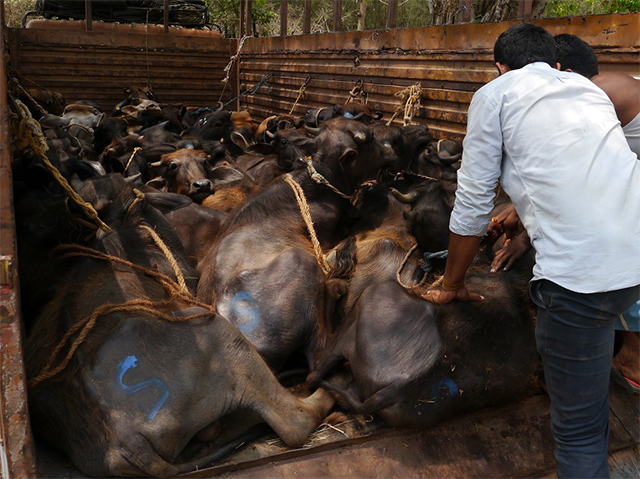 The moment we arrive at the market, a big cattle transport is being ready for departure. We stop it to inspect the load bed. Instead of 14 calves, the maximum number of animals permitted to be transported by law, the truck carries nearly 40 of them. The calves’ legs are tethered together and they lie jammed one upon the other on the load bed. As we call the police, the men start to unload the truck and lead the calves to a nearby forest area. They know that the animals are going to be confiscated if they remain on the truck when the police arrive. As the men greatly outnumber us we cannot stop them from unloading.

We guard the truck until the police arrive. After we have reported the incident to the officers, they confiscate the vehicle and verify the identity of the driver who is facing a fine now. It is encouraging to see that the authorities immediately came to the market and took action.

We advocate for routine checks to be conducted by the local authorities on market days. Because without the authorities taking decisive action on violations against the transport regulation, utterly overloaded cattle transports will not cease to be an everyday occurrence on India’s streets.