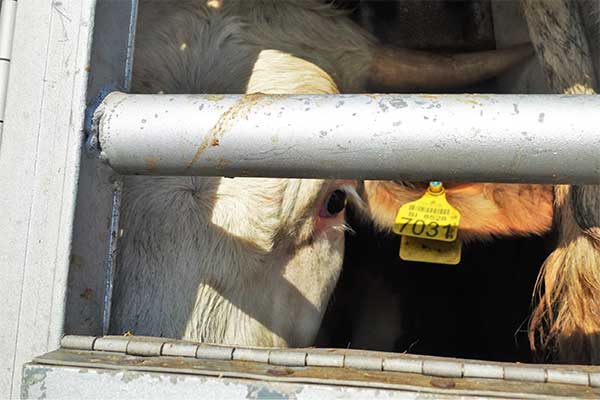 In Italy we encounter an animal transport with heifers from Slovenia. The animals are being transported to the south of the country for slaughter.

In the rear compartment, the heifers have hardly any space. They are crowded together, body to body. Anika is lying on the ground, the other animals trample over her in the confinement and step on her several times. Ivanka is standing right next to Anika - her horn is broken off and bleeding. We immediately report this to the police and official veterinarians, with whom we carry out joint inspections before Easter.

Maja the heifer also needs help. She is lying down and can't get up. She looks extremely tired and exhausted and has cloudy eyes. The drivers try to get her to get up and pour water on her. Among the veterinarians present is a cattle specialist who takes a closer look at Maja. But he thinks Maja is "only" suffering from transport stress and has some fever, but is not clinically in bad condition. Together with the official veterinarians, he decides that Maja will remain on the truck and will not be unloaded. Ivanka with the bleeding horn will not be unloaded either.

We disagree: Maja is much too weakened. She will surely want to lie down again and then in the confinement she will again not be able to get up and will be trampled. We think that the vets did not take into account the situation on board the animal transport - the confinement, the other animals and their long horns. But the officials have the final say.

For us it is very hard to see that Maja and the other animals have to continue the long journey. At least the officials issue a fine of 3.300 Euro against the transport. With our documentations we will file a complaint with the responsible veterinary authority of the place of departure.