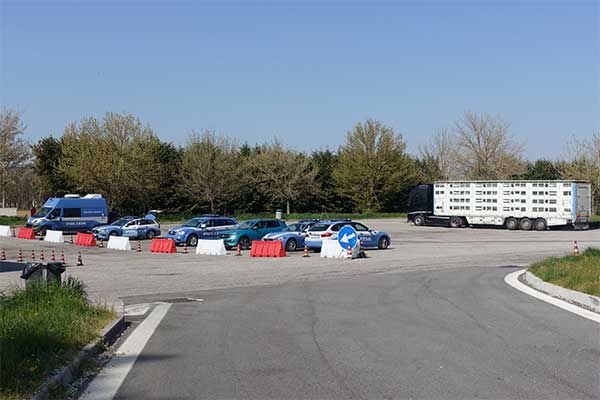 Animals' Angels has asked the Italian police to specifically check lamb transports before Easter. During this time, especially many lambs are transported from abroad to Italian slaughterhouses. Also the police of Udine follows our request and organizes specific controls.

During the time we could be present at the controls, the police officers checked three trucks with young lambs from Romania and Hungary. In two of them they found violations and imposed appropriate penalties. The lambs are loaded on too many levels in both trucks. As a result, the ceiling height is very low. Many of the cattle cannot even stand upright, but bump their heads or even their backs against the ceiling - in this unnatural position they are forced to hold out for many hours.

The air on the transporters is also stuffy, especially in the middle, as there is no adequate ventilation. In addition, due to the arrangement of the loading levels, some of the drinking devices are not accessible to the lambs. In the affected compartments, the young animals cannot drink. They suffer from thirst during the entire transport - thousands of kilometers.

A little later, a transporter with cattle from Slovenia is checked by the police. The violations are similar and are also punished. Here, too, the ceiling height is too low for the large animals. Some cannot hold their heads upright - for many hours. The truck is equipped with a watering system, but very little water reaches the water pipes in the rear compartment.

In the last compartment, so many animals are loaded that they are crowded together and can hardly move. One bovine is lying on the floor and obviously can't get up because of the crowding. Another bovine is jammed with a horn between the bars on the side of the truck. It cannot free itself. The drivers are able to resolve both situations, but the stress and suffering of the animals is evident.

The police issue fines of over 10,000€. We welcome the commitment of the Italian police and continue to fight for stronger controls on animal transports on the roads of Europe.