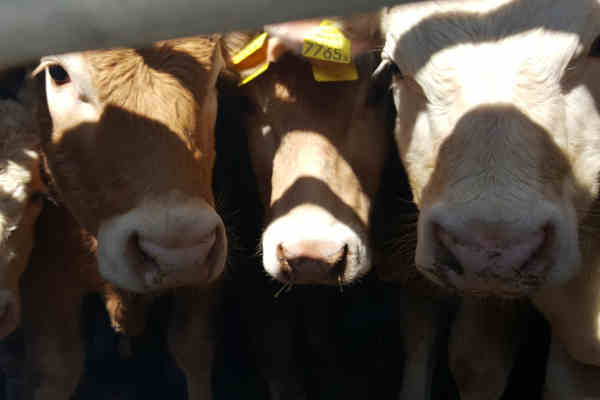 In the evening of March 10 we arrive in Kapikule, the Turkish border town just behind the Bulgarian border. It is raining heavily. At the currently only supply stable on the Turkish side there is an animal transport from Hungary. The calves have been unloaded. In the early afternoon of the next day, the animals are loaded again. The journey continues.

While we talk to the drivers and inspect the transport, Ference, Laszlo and Akos look at us with their big eyes. They have beautiful, awake eyes with long white or light brown eyelashes. Closely packed they stand on the truck, body to body. Their fur is crusted with old manure in many places, some animals have skin rashes and bald spots on their bodies, others cough.

The drivers report that the Turkish buyer did not pay on time, so they were told to wait at the border - for three days.

The transport plan approved by a Hungarian official veterinarian is somewhat obscure and inconsistent on some points. According to the plan, the transport will go to Istanbul, but the real destination is Aksaray, about 700 km southeast of Istanbul. Unfortunately, this is yet further proof that the EU animal welfare requirements are not being complied with as prescribed up to the destination. After all, there is no one to monitor this - apart from the animal welfare organisations, and so the drivers make some dangerous manoeuvres to lose us along the way. But we can gather enough evidence to confront the authorities and take action against the transport company.