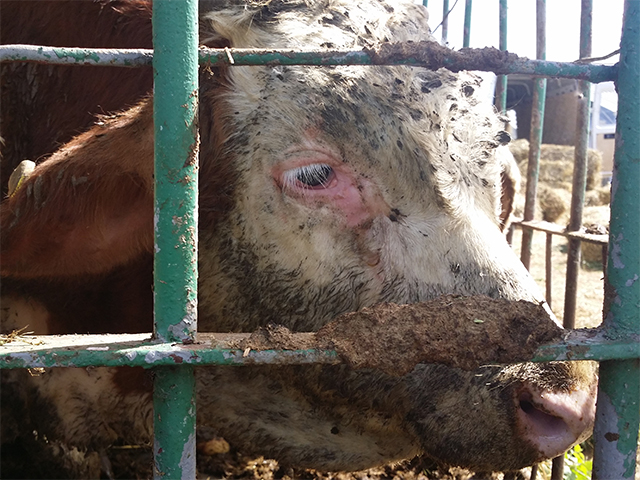 19 May 2016: Calves Still at Slaugtherhouse in Bulgaria

After two trucks with Austrian calves on board were stuck for 11 days at the border between Bulgaria and Turkey (they were refused entry to Turkey due to deficient accompanying papers), they were eventually sent to a slaughterhouse in Bulgaria on 22 April.

But their suffering was not over yet because instead of being slaughtered, they were kept there under appalling conditions for weeks: they did not receive sufficient feed, the water was dirty, the floor of the pens was completely covered in feces and the pens were crowded.

At least 13 calves died and 21 simply disappeared. Animals’ Angels has been in constant contact with the involved parties, but as the situation did not improve, we went directly to Bulgaria. Here, we learned that part of the calves was slaughtered after three weeks at the slaughterhouse, but more than 30 are still there.

We met with different local competent veterinary and customs authorities, as well as with a representative of the Agriculture ministry in Sofia. As a result, the calves at least receive feed. We were told that the calves would be slaughtered on 19 May 2016, but at noon of this day they were still at the slaughterhouse.

As long as exports of animals are allowed, situations like this will repeat over and over again.

Due to the inertia of the EU member states, primarily Hungary, involved in the case of two trucks with calves stuck at the Turkish border at Kapikule, and to the great risk to which the animals were exposed, left to starve, Animals´ Angels decided to go to Turkey last Thursday.

Finally, on Friday 22 April, Bulgaria and the European Commission decided to re-import the calves to the EU. Unfortunately, instead of re-importing them to Hungary and then to Austria, the worst decision was made: the calves were transported to a slaughterhouse in Bulgaria where they will be slaughtered soon. The fact that they were finally unloaded and fed instead of dying from starvation inside the trucks is barely comforting.

Our frustration is further increased by another bitter discovery: an additional third truck has been stuck at the veterinary customs of Kapikule for 13 days now. The veterinarians at the Turkish border inspection point found the accompanying documents of this transport of Belgian calves to be faulty.

Animals´ Angels decided to stay in Turkey to monitor the case.

Still there is no solution in sight at the veterinary border inspection post at Kapikule, Turkey. Both calf transports are still being stuck. Yesterday, the transports were only re-parked to a different area at the customs post. The information we are getting is that all animals on board are still alive.

Some hours ago, Animals’ Angels arrived in Turkey to try to find a solution on site. Besides, we have been in contact with several newspapers and other media over the past days.

We greatly thank all people who have provided us with helpful contacts, and everyone who supported the calves by sending messages to embassies and authorities!

We will soon keep you updated on the developments on site.

Two trucks with calves are currently stuck at the veterinary customs of Kapikule, Turkey. Today is day seven for these animals, who are still alive so far, despite suffering hunger and thirst as it is not possible to adequately feed and water them on board the vehicles. They can barely move and have to lie on a thick layer of their own manure.

Animals' Angels has been applying pressure on all relevant authorities to achieve for the animals to be at least unloaded in a stable near Kapikule where they could rest and be fed and watered until the administrative problems concerning mistakes in the papers are cleared and a solution is found.

So far, the animals are still detained on board the trucks. Animals' Angels is asking your help: share this story or write to your embassy in Turkey demanding to immediately unload the animals in a stable in Kapikule.

Animals' Angels will continue to put pressure on the EU member states to stop long distance transports of live animals from EU to Turkey.