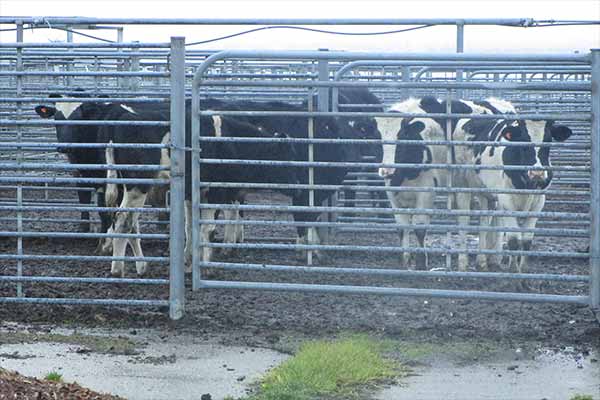 Animals‘ Angels revisits the saleyard at Colac. The sale is small with only approximately 165 animals and six very young calves for sale.

This facility is covered and in most pens there are wood chips on the floor. However, there are also outside pens that are used to hold cattle after the sale. The cattle for sale appeared fit to sell and transport.  At least one of the six calves appeared to have scours or diarrhea.  Another term that may be applied to this disease is enteritis, which means inflammation of the intestinal tract. We were unable to identify which one.

Additionally, the temperature was 13° degrees and although the building protected the calves from the cold rain and winds, the animals were in our view, very cold to touch.  Although they were sold at 11am, four were collected at 4.30pm while the other two remained for at least 1.5 hours after that time, to be collected. We would have preferred that they were loaded and transported in a covered truck as soon as possible after the sale.