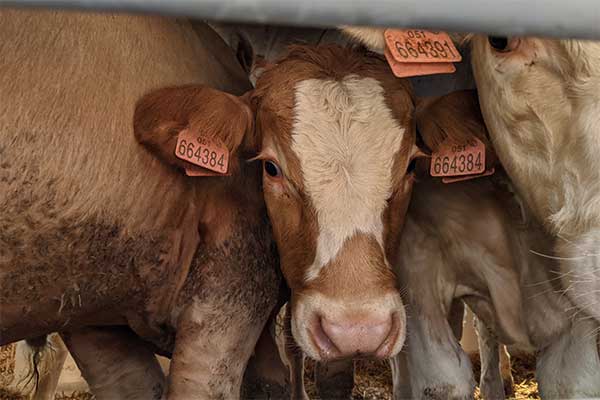 Animals' Angels is in action at the border between Bulgaria and Turkey. Via this border post all animal transports towards Turkey pass the EU external border. In the first days only a few animal transports with 'fattening' calves arrive. Even though the few transports are probably not due to the high temperatures with up to 36 °C, we are happy for the animals. They are spared the heat stress as far as possible.

But unfortunately not all of them. A transporter with young bulls from the Czech Republic arrives at the checkpoint at 8 o'clock in the evening. The calves are unloaded. In exactly 24 hours, i.e. at 8 o'clock in the evening on the following day, the driver is allowed to drive on. However, the border post on the Turkish side is closed at this time and does not open again until the next morning. What will the driver do? The next evening, we check whether the truck is still at the checkpoint. And lo and behold: the transporter loads up the bulls and drives off a little later. Instead of being kept in the barn, the animals now have to wait on the transporter at the border for the next 12 hours - without food, without enough water and without enough space for all of them to lay down. Once again, profit takes precedence over the needs of the animals.

We also cross the border and meet the transporter the next morning on the Turkish side. For the onward transport Turkish papers are needed, which have to be issued separately. This can take several hours and additionally extends the transport time for the animals. We inspect the transporter and look at the animals. They are restless. They clearly show that they are thirsty and hungry. We notice the small bull Dastin, who looks at us exhausted. He stands crowded in the middle of the transporter in a compartment, separated on both sides. This means that Dastin and the other young bulls do not get any water because there is no drinking trough installed in their compartment. But even the existing drinkers in the front and rear compartments are dry and dirty. They seem not to have been used for a long time.

We speak to the driver about this. He thinks it is quite sufficient if the animals get water every 29 hours. Also the responsible veterinarians at the border did not notice the missing water supply. Unfortunately, we find three other transporters where also a part of the animals has no access to the watering troughs. We document these clear violations and will notify the authorities and the EU Commission.

This operation shows once again that even the long-distance transports that are considered 'problem-free' mean extreme suffering for the animals. The drivers have the opportunity to act in the best interest of the animals, but unfortunately this happens far too rarely.