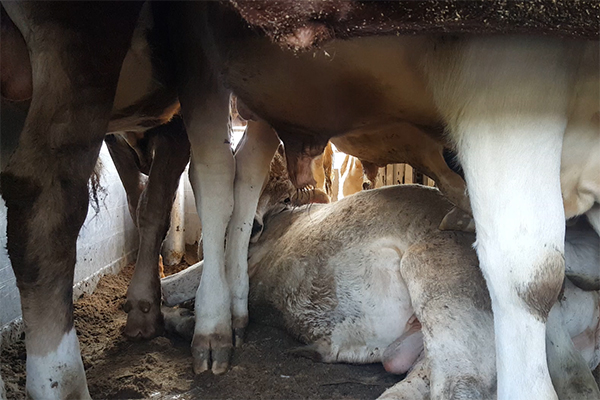 We are waiting for animal transports at the border between Bulgaria and Greece. We want to know if transports to Albania are still taking place – despite the travel warnings for this country regarding Covid19. And indeed: We find two in a few days. The first one arrives in Greece in the greatest heat of the day at 38 °C in the shade. It is an old acquaintance. A year ago we followed exactly this truck deep into Albania. The transport conditions were catastrophic.

And that has not changed despite our complaints to the authorities. The vehicle is still transporting cattle, although it is not equipped with a suitable watering system. And again, temperature limits are ignored. During a driver's break in the blazing sun, the temperatures inside rise to over 35 °C.

The Bulgarian cattle suffer not only from heat stress and thirst. Young bull Violin is lying on the ground, completely exhausted, trampled by the other animals. His ear is bleeding, the ear tag has been torn off. Despite the intervention of the drivers, he cannot get up.

During the journey we try in vain to have the police stop the transport so that the animals can be unloaded in a nearby stable. Also at the border to Albania there is no veterinary control.

Two days later we accompany the next transport with Bulgarian cattle to the Albanian border. Again a similar picture: The truck is completely overcrowded. We hardly see single faces in the crowd. There is no bedding – the animals are standing on the completely dirty and slippery metal floor. During manoeuvres of the truck we hear them sliding. This transport travels through Greece at night in cooler temperatures, but in Albania the animals will face 37 °C.

Unfortunately we have to let both transports drive at the border – due to Covid19 we cannot enter the country. However, we are doing everything possible to stop such transports.