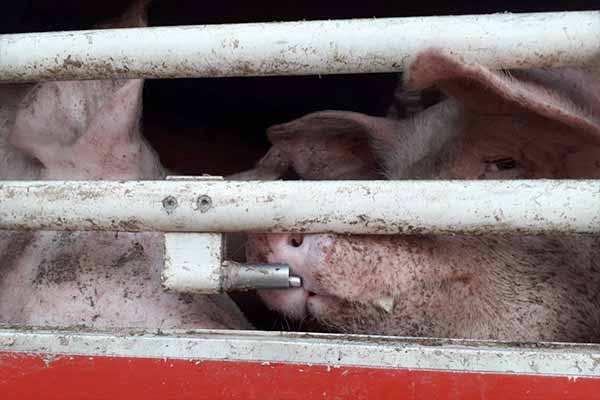 Last Friday, temperatures on the route from Spain to Italy again reached the 35 °C mark. We accompany an animal transport with Spanish pigs being transported to a slaughterhouse in southern Italy. The animals on the second deck of the vehicle cannot drink because the drinking troughs are blocked by the ventilation struts. We therefore decide to alert the police.

But we have to wait until evening until it's cooler. In this heat, we cannot risk stopping the transport for a long time, as the checks can take hours. Meanwhile the transport reaches southeast France. But the police are not coming. All attempts to call in the French officials fail. As soon as the transport crosses the border, we try in Italy, but here too, tourism has priority. There are no officials available.

The transport continues unhindered towards south. Near Rome the animals are finally unloaded. On the one hand good, because they can at least all be supplied with water. On the other hand, the transporter does not adhere to the regulations here either: Instead of the prescribed 24 hours, the pigs are granted a break of just 10 hours. This transit stable is known for circumventing the legal regulations. We try to call the police again, but from Rome to the south of Naples there are again no officials available. The pigs are not well. They pant heavily and many have foam around their mouths. The older driver is aggressive, he threatens us with a wooden beat, tries to lose us several times and even takes detours to get rid of us. Finally the transport arrives at a slaughterhouse at the heel of Italy.

At the EU Conference of Agriculture Ministers a few days ago, the issue of animal transport was discussed in detail. EU Commissioner Andriukaitis addressed clear words to the EU member states to respect the legal temperature requirements and not to dispatch any transports at temperatures above 30 °C. Various ministries, including Spain, Italy and France, had published corresponding communications and announced special measures. Once again, however, we have to recognise that there is a wide gap between theory and practice.

While all news channels in Italy speak of 'African heat', animal transports continue. They are being dispatched despite the heat. All the tricks are used to circumvent the rules - and there is not even any guarantee that the animals get water along the the way.

The police have different priorities and are often unable to intervene. We have to let 'our' pigs go to the slaughterhouse and say goodbye to Pedro, Ernest, Ivan, Ruben, Hector and their fellows with a heavy heart. We are exhausted, sad and angry. Now all we can do is send complaints to all parties and authorities involved and involve the media.

We are not giving up. These days we have seen that the transporters fear us more than the competent authorities. We see this not as a success for us, but as further proof that the system and the implementation of animal welfare rules are not working.