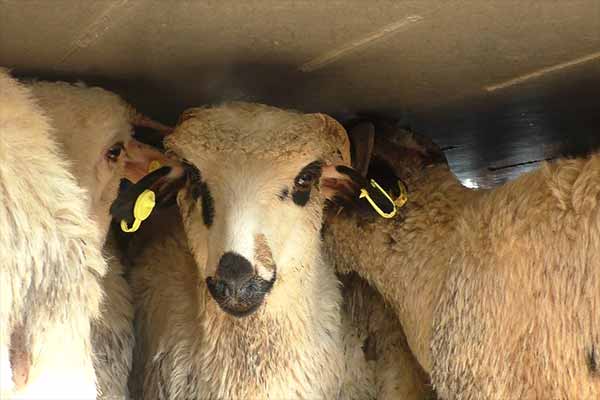 A team of Animals´ Angels is on the route from Romania to Greece to check how lambs and sheep are being transported during hot summer temperatures.

In November 2018, the Greek Ministry of Agriculture already openly declared that they cannot refrain from importing live animals in summer. Likewise, the Ministry of Agriculture of Romania stated that they will put economy and profit first – also at the expense of animal protection laws. On a similar note, the Romanian minister recently ignored the EU Commissioners’ call to stop live shipments to the Middle East in summer due to extreme temperatures on the sea. Animals’ Angels too warned the Romanian authorities to suspend transports to or via Greece in summer and asked the Greek authorities to organise checks at the border to send trucks back to the point of origin, to give a strong sign to Romania. We also informed the EU Commission which then warned Romania again.

Back to the route between Romania and Greece, we measure temperatures of 40 °C during the day in North and Central Greece. Despite this and all recent warnings, we find 11 animal transport going to Greece, or via Greece to Albania.

This time, our investigation is even more difficult than ever: The truck drivers react aggressively towards us, not only verbally, but also physically. They do not want us to get close to their trucks and have a look at how the animals are coping with the heat. We have to play catch-up, waiting for them to stop at the border or toll stations and literally jump out our cars to quickly look inside the trucks.

Since 2017, we have been calling on the Romanian veterinary authorities to transport less animals per truck and to warn transporters to use straw or sand bedding. We have been asking to avoid transports during extreme temperatures, in winter and summer, and offered them the names of transport companies and examples of recurrent illegal habits to be officially checked. We offered partial solutions which do not, per se, stop all transports – as we would like – but allow them to continue while ‘just’ respecting the law.

Nevertheless, we do not see any change. Despite EU laws and guidelines that have been developed for millions of euro, the transports continue also during extreme temperatures. The animals are not being protected on this route and we haven’t seen so far not even a small improvement.

Instead, we document transports with lambs driving an entire day in the heat of Greek summer – because unaware tourists increase meat consumption during their summer holidays. And because the Greek government does not want to find an alternative to live transports.

We see ‘the bad habits’ continue undisturbed: Too many animals being transported in filthy conditions, with limited or nearly no water supply, for long distances, in the scorching sun.

We alert border policemen and veterinary offices in Greece to stop certain trucks and take specific action to limit the animals’ suffering – in vain.

We will, nevertheless, continue to collect evidence and bear witness, going for an infringement procedure against Romania for not protecting animals from unnecessary suffering during transport – at least – and to prove that we need a new regulation for the animals.