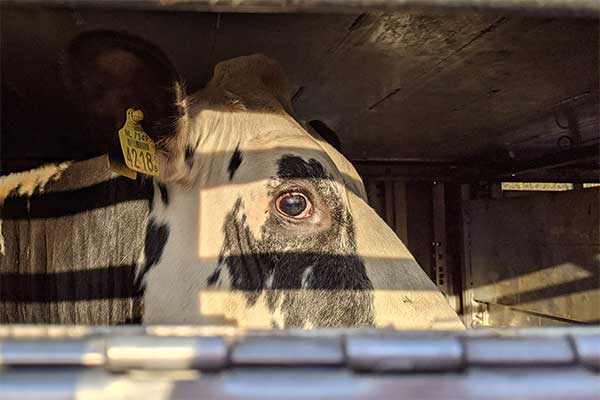 In Germany, Animals' Angels inspects two animal transports with young Holstein cows from the Netherlands. Looking inside the vehicle, we see that the ceiling height is too low for some heifers - for example for Erna. She is so tall that her back almost touches the vehicle ceiling. This is a common problem, especially for large-framed Holstein cattle, when they are transported on two floors.

Erna and the other 65 cows will be exported to Russia - over 2,000 km. The Netherlands was the first EU member state to ban the export of animals to non-EU countries in the spring of 2020. But only such transports, where outside the EU a 24-hour supply stop was necessary. This was and is an important step! But unfortunately it still does not go far enough.

Thus, animals can still be transported from the Netherlands to non-EU countries. As long as they do not have to be unloaded again outside the EU for a 24-hour break in a supply stable, but arrive 'directly' at their destination within the prescribed maximum transport time (in the case of cattle: max. 29 hours). Thus, although long-distance transports to Kazakhstan, Uzbekistan or even to the southeast of Russia are no longer permitted, transports to the west of Russia are - and that is exactly where Erna and the other cows are taken.

Through our work, we want to achieve a general ban on exports to countries without animal welfare guarantees and are campaigning for this at national and EU level.