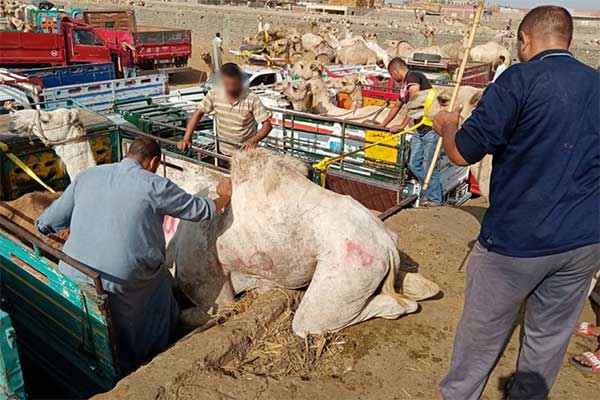 Animals’ Angles’ is back at Birqash camel market near Cairo. The market is crowded, chaotic and on top of that, the temperature reaches more than 40 °C.

Our vet team provides the exhausted camels – which arrive to the market after very long journeys of several weeks – with fresh water and some food. They also take care of the injured animals. At the loading area, Omar and Eslam try over and over to convince the workers to treat the camels with respect and to be more careful with them. The camel Haidar is beaten badly during loading. Eslam tries to convince the workers to be more attentive but unfortunately, Eslam’s effort fails. While trying to escape, Haidar falls between the ramp and the pick-up. The workers try to get Haidar up again by hitting him. Finally, Omar and Eslam can stop the workers.

Our team spends two days in a row at the market helping as many camels as possible being often in the same situation as Haidar. At home in Frankfurt, we hope that we will soon be able to travel to Egypt again to support our team on site.