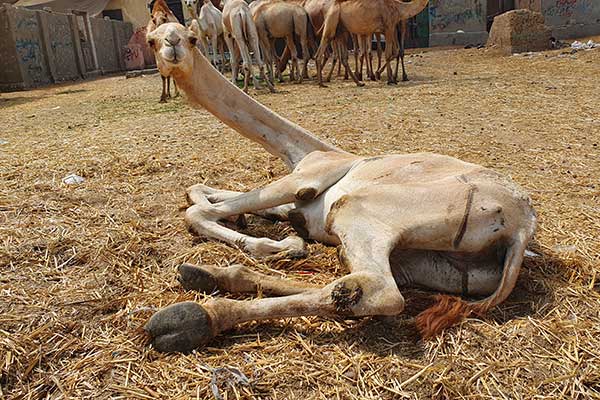 Animals' Angels is back for the camels in Birqash, north of Cairo – at the biggest market for 'slaughter' camels in Egypt. Today, mainly the big trucks arrive from the south of the country. On average, 34 camels are loaded per truck. The animals are all transported sitting down, squeezed tightly together on the hard vehicle floor. They cannot move because their legs are tied together with thin parcel cords. There is no water, food or protection from the sun for the camels on board the cargo trucks which are not even built for transporting animals. And yet every week thousands of camels are transported over 1,200 km from southern Egypt to Birqash. We talk to many drivers and they all confirm that they started the day before in Abu Simbel in southern Egypt. On average they are on the road for at least 18 hours. Without a break, water or food for the animals. Before that, the camels already have a long journey behind them, because most of the animals come from Sudan or some even from more distant countries like Somalia. In southern Egypt, they have to undergo a two-day quarantine before they are finally transported to the north of the country and sold on for slaughter.

From noon onwards, the transporters arrive at the market one by one. The workers are already waiting with their sticks. The exhausted camels, who have been tied up sitting for almost a whole day and could not move their legs a tiny bit, now have to get up quickly in the rush of unloading. For many this is difficult, and they are wobbly on their feet. The camel bull Zahir, like many others, has to jump out of the truck with one front leg tied up. During unloading, he gets stuck in a small gap in the side flap of the truck with his two hind legs. He is stuck and screams. With a lot of pulling and tugging and only some effort the workers get him free again. Some camels that are unloaded without a loading ramp fall out of the truck when they jump. When we confront the workers with the problem of why they don't at least use a stationary ramp, one of the workers freaks out, waving his knife wildly and shouting. The atmosphere is tense and reflects the madness to which the animals are subjected here every week.

Even though today is still a rather quiet market day, we find some injured animals - some of them have abrasions on their hocks from the long transport, like the camel bull Yassin. He lies there exhausted, and we can do nothing for him at that moment but organise water and some alfalfa. Later we see that he was at least able to stand up again. In Yassin's group is also Eldin. His right front leg is swollen due to a festering injury at the carpal joint. None of the workers are interested in him or the other camels and we realise once again how difficult it is to make even a small difference for the animals here. But looking the other way is not an option, and we will be back tomorrow to stand by the camels.