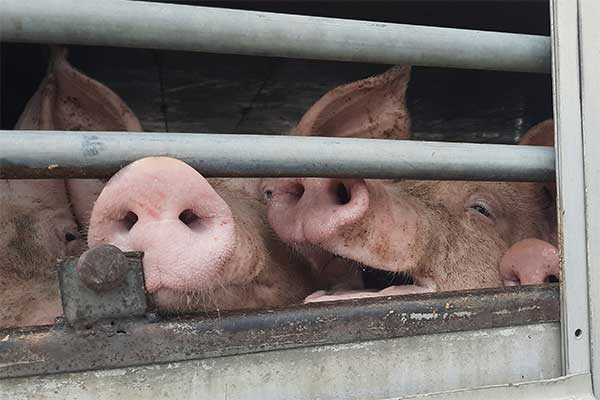 A team of Animals' Angels controls an animal transport with pigs at the border between Greece and Albania. When it stops at customs, we can quickly check on the animals.

Dorea, Filomena, Zoe - they are all suffering badly from the heat. On top of that, it is crowded on the truck. They look at us, almost seeking help. They could hardly show their distress more clearly: they are breathing fast, panting and foaming at the mouth. They sit in an unnatural 'dog sitting' posture and stretch their trunks against the bars. These are all clear signs of heat stress. They would need water and the opportunity to wallow in the cool ground. But they don't even have enough room to lie down at the same time. Instead, they stand and lie partially on top of each other.

Unfortunately, we don't have enough time to talk to the drivers. We would like to know where the pigs come from and where they are transported to. And above all, why they are transported at midday in the greatest heat of the day. There is also no veterinarian on site who could answer our questions – even though transports with live animals would have to be checked when leaving the EU's external border. The animals and the transport conditions would have to be inspected, and in this case the authorities should have intervened. The animals should not have been transported here or further in this heat. Even more, they were not identified as required by law.

But at this border there are no veterinary controls by the Greek authorities. We have already noticed this in the last years and reported it to the responsible Greek and European authorities. But nothing happened. The animal transports pass the border completely unhindered. Just like this one.

Nobody sees the suffering of the pigs, nobody intervenes. Apparently just another transport with 'goods'. But not for us. We are relieved when shortly after a thunderstorm comes up and brings the pigs the urgently needed cooling. Unfortunately, we cannot accompany the transport to Albania. But we pull out all the stops so that these transports no longer take place unseen.