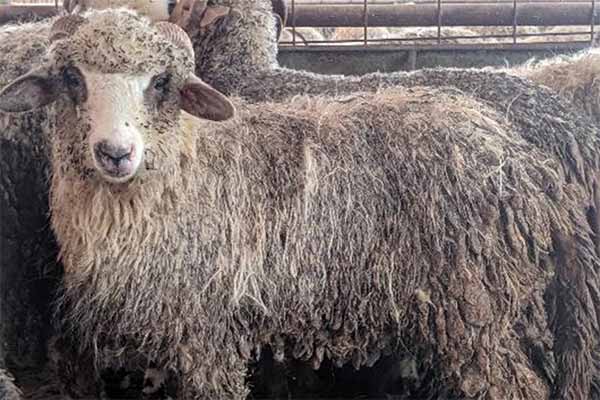 Animals' Angels visits several local animal markets in the Middle East where sheep and goats are sold. Overall, the markets are relatively tidy and all animals at least get water and food. In all paddocks there is shade and the fans are running. Most of the animals come from the region – but today we also find sheep from the EU here!

In the past, Australian sheep were sold here instead. But since this year, Australia has at least during the hot summer months imposed an export ban to the Middle East. But what is the EU and its Member States doing? Instead of following Australia's example, EU countries fill this 'gap' and export their animals to the Middle East. Europe should be ashamed!

We are shocked by the condition of the sheep: they are extremely dirty from top to bottom, their fur is totally covered with excrements. Some sheep cough or have nasal discharge. The heat and high humidity also make it difficult for them to cope. Some pant with their mouths open or lie exhausted on the ground. We don't want to imagine under which bad conditions Liviu and the other sheep were transported by ship to look so dirty and miserable. In addition to all this suffering, there is a paradox: nobody really wants the sheep here. They are later sold off for the guest workers as 'cheap meat', which costs less than a third of what is charged for local sheep.

It is an evidence of incapacity for the EU and its member states, which again this year failed to ban the transport of animals at least during the hot months. Instead, they seek profit at any price and throw any ethics overboard.