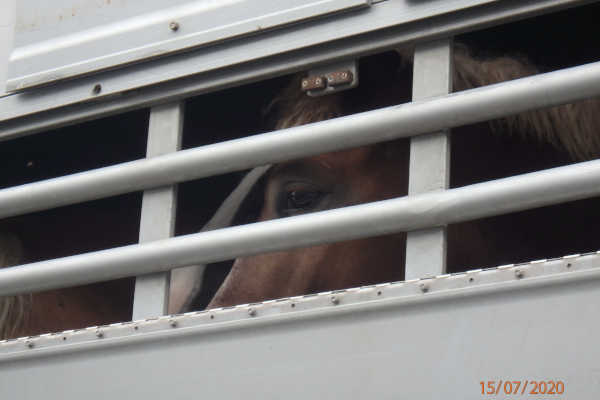 At the Spanish-French border, ANDA and Animals' Angels check a transport with horses. The driver states that the horses are pregnant mares being taken to a summer meadow nearby and that in total it was only a four-hours transport. We suspect that the information is false. Despite the summer temperatures, the truck is closed high up, so that it is hardly possible to look inside from the outside. We suspect that the driver wants to prevent that from outside it can be seen that the horses are not placed in single stalls and that they are not wearing halters, as is required for long distance transports. For instance, to Italy. Therefore, we decide to stay behind the truck. The transport goes first to Nimes in the south of France. There it stops by the road in an industrial area and the horses are transferred to another truck. The journey continues, as suspected in direction of Italy. We arrange a police check, which shows that the animals are now transported in accordance to the regulation. Arriving at their destination in Tuscany, our team meets the angry buyer of the horses. Trembling with rage, he reports that he has not been able to take a holiday for six years because of the fines he is constantly paying because of ANDA and Animals' Angels.

But the fines do not seem to deter him, he continues circumventing the animal welfare rules. For us, this example shows once more that long-distance transports of live animals, which only aim to maximise profits, must finally be stopped. The industry will always try to circumvent animal welfare laws that cause higher costs and the authorities cannot guarantee sufficient controls.