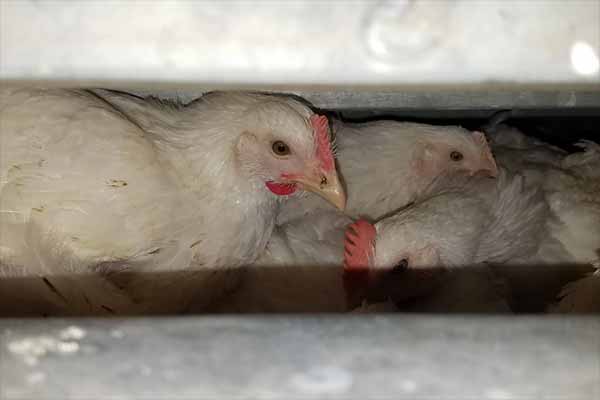 In Italy, Animals' Angels controls a transport of chickens from Bari to a slaughterhouse over 600 km away. According to the drivers, 6,000 chickens are loaded – 6,000 individuals.

We are shocked as we approach the parked truck and see the animals up close. Crammed together in the transport cages, the animals have no place to move. The cages are much too low and much too full, but unfortunately this is common (and permitted) practice for chicken transports. Due to turbo fattening and their much too heavy breasts, they can no longer carry their own body weight of about 3.5 kg.

We immediately find a dead chicken and many lying on their backs - we don't know whether they were forced into the cages during loading or whether they were thrown back and forth by the truck's movements so that they fell over. But we know that they won't get up on their own. Their heavy breasts are pressing on their internal organs and the animals are visibly suffering. Chicken Agatha is stuck with her right wing between the bars of the transport box. The result: open bone fracture. How long has Agatha had to endure like this?

The drivers are not interested in all this – they probably regard Agatha and the others only as goods that are there for killing and eating. It breaks our hearts not to be able to do more for the chickens than to put those we can reach back upright, to free Agatha's wings and to document this cruelty.

Even if we know that such chicken transports are unfortunately no exception, but frighteningly the sad normality, we will in any case file a complaint with the competent authorities and do our best so that at least this chicken transport does not remain without consequences for those responsible.