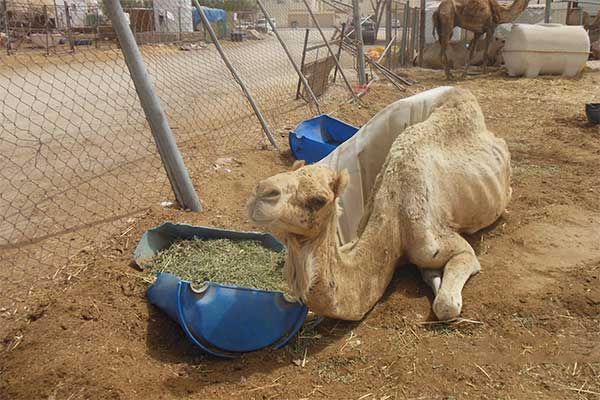 It all started with Habiba, a camel cow we met a few years ago at an animal market in the Middle East. Habiba was dying, her death throes lasted for days. She could no longer drink or eat anything. During the day she was exposed to the blazing sun - at 40 °C in the shade. At that time we could not find any help for Habiba. From the owner, to local animal welfare organizations and official veterinarians, everywhere we encountered indifference. A temporary roof we built for Habib was dismantled in no time. Finally Habiba died and her suffering came to an end.

But Habiba's fate did not let us go. We decided to take a closer look at the animal welfare situation of the camels: We quickly found out that there was almost nothing about it. No one seemed to be dealing with this issue. We wanted to change that! In 2018, Animals' Angels issued the first report on animal welfare of camels during transport. And that same year, we gained the support of Professor of Veterinary Medicine, Dr. Barbara Padalino, for our camel project.

Together, we traveled to the Middle East twice in 2019 to study camel husbandry and collect data for our first scientific camel project. Today, the prestigious science journal Frontiers published "The First Protocol for Assessing Camel Welfare." A joint project between Dr. Padalino, the University of Bologna and Animals' Angels. It identifies the basic needs of camels in holding facilities, as well as the conditions for keeping them in a more welfare-friendly manner. It is a first milestone for the protection of camels. Further publications are planned as well as seminars and practical guidelines for the protection of camels.