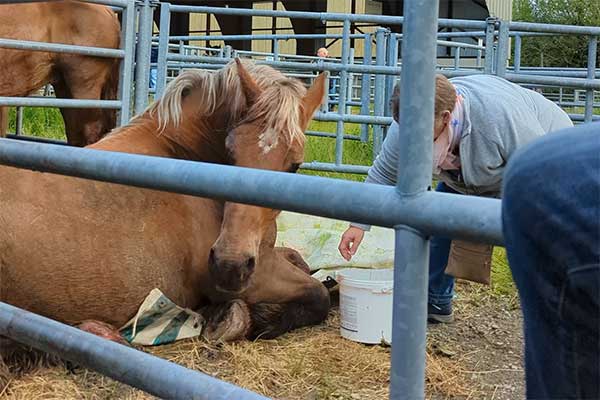 Too many horses in the truck, hectic during unloading - the mare Lilou has to suffer. She lies injured in a pen at the horse market in Maurs, France. We are on site to document the transport of the horses.

The transport with Lilou and the other horses has already arrived at the market during the night. We learn that Lilou must have fallen while unloading the animals. The other horses trampled over her. Now she is lying in a pen at the market, weak and injured. One of her eyes is bleeding and badly swollen. Our team is looking for help, fortunately two vets are already on their way to Lilou. Then our team has to move on - a transport is leaving the premises, which they are eager to follow.

Lilou's case shows once again that many of the accidents during animal transports and at the animal markets could be avoided. Carelessness, overloading, hectic - the ones who suffer are always the animals. With our commitment at the market in Maurs, we want to ensure more attentiveness and respect for the animals here as well. We demand from the operators that they consistently apply and enforce the laws for the protection of animals during transport. So that fates like that of Lilou are not repeated.