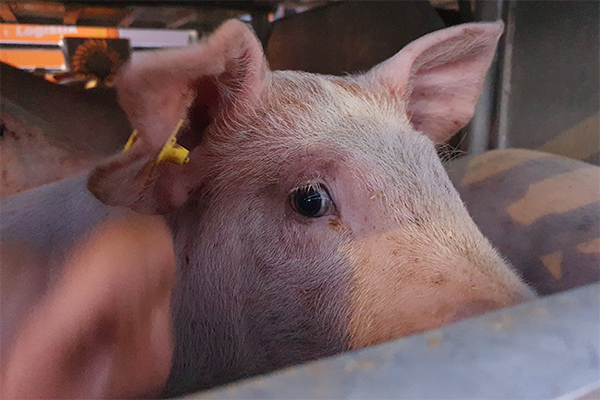 A team from Animals' Angels is following two animal transports with piglets in Germany. They come from Denmark and are now being transported to Romania at the age of only 10 to 14 weeks to be fattened.

After three hours of driving at temperatures of up to 32.5°C, we finally get a chance to see the animals and talk to the drivers during a short stop. Almost 1,300 animal children are on the two trucks. Some of them are restless – they don't have much room to move, as there are other piglets everywhere around them.

In both trucks the water system seems to be switched off. However, the law requires that pigs must have access to water at all times during such long journeys. We watch Bob trying to drink from a water nipple. But he only gets a few drops out of it.

Many of the animal kids breathe quickly. Even though piglets can cope better with warmer temperatures than adult pigs, such a long transport is enormously exhausting for them. And according to the law, this long-distance transport should not have been approved at temperatures above 30 °C.

Unfortunately, we cannot accompany the piglets to their destination and with a heavy heart we let them go at the Czech border. We will request the transport documents and check whether there have been any further temperature violations. And of course we will lodge a complaint with the responsible veterinary authority. It is not acceptable that economic interests are repeatedly put above animal welfare!