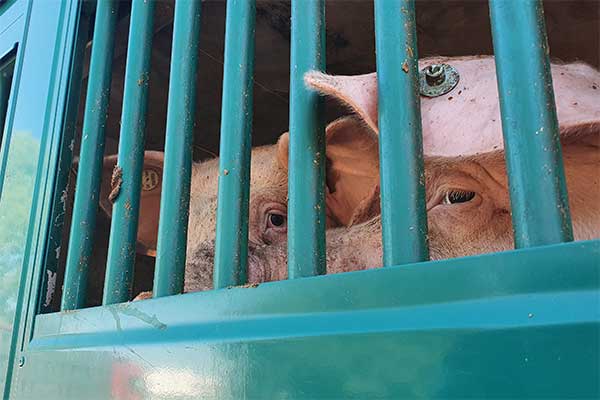 Animals' Angels is following an animal transport with pigs in Northern Germany. Despite the high temperatures, the animals are transported during the midday heat. The destination: a large slaughterhouse in Lower Saxony. For us it is absolutely incomprehensible why such a short-distance transport (< 8h) is not at least shifted to the cool evening, night or morning hours! This would at least save some suffering for the animals – especially for the pigs, who cannot sweat and quickly suffer from heat stress.

On the way we document that the truck stops at the greatest midday heat and parks for two hours on the premises of the transport company – in the blazing sun with the animals on board! The pigs are not even spared unnecessary transport delays and heat stress on their last way to the slaughterhouse. When the animals finally arrive there in the afternoon, they are exhausted. Some of them pant with their mouths open or have foam at theirs mouths. Just like Carla and Marlis, who look at us through the bars of the truck with tired eyes.

This transport is another example of the ignorant and reckless treatment of the so-called 'farm' animals. As it is a short-distance transport, it did not have to be approved in advance. Unfortunately, these transports often evade any official control. However, we have already informed the local veterinary authority and will continue to campaign in Germany and the EU for a general heat ban.