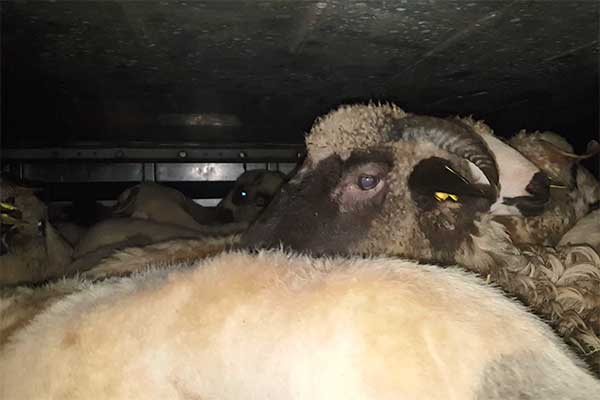 Heat wave in Greece – temperatures up to 47 °C – but the animal transports continue! A team from Animals' Angels is on-site on the highway in the north of the country.

Many of the sheep and lamb transports come from Romania. The government there recently instructed the veterinary offices to no longer allow these animals to be transported on four levels, but on a maximum of three. This is to give them more space and allow the air to circulate better. So much for the theory. But the new decree is apparently being ignored by transporters because it threatens their profits. In the trucks with three levels, we therefore see far too many animals – even more than usual – squeezed tightly together. They stand so close that they are almost unable to move. In addition, some of the trucks are not built to transport the animals on less than four levels. As a result, most of the water troughs are not at the same height as the animals. Many cannot reach them and remain thirsty in the heat.

Therefore, it is little consolation that many of the transports must have traveled during the cooler night hours. For most of them we find in the early morning. But their total distance is usually much too long for one night. Inevitably, the animals are also exposed to the hellish heat in Greece during the day.

As always, we write a detailed complaint report to the relevant authorities. They must finally stop these transports!