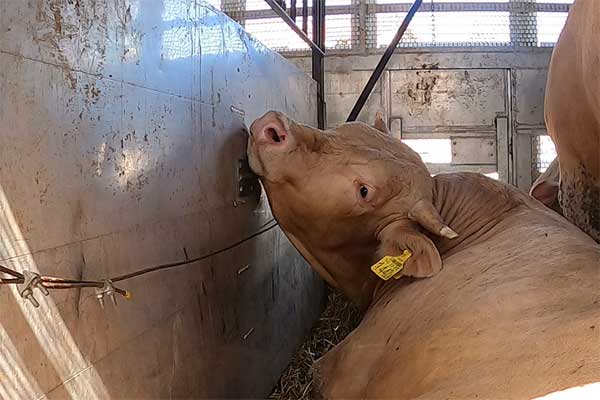 In Greece we find an animal transport with Hungarian bulls. For the first time we meet Zoltan and the other bulls in the evening on the highway, in the middle of Greece. It is hot and the bulls look at us with tired eyes. They still have a long journey ahead of them – they are to be transported to the island of Kos, despite the high summer temperatures.

Two days later we meet them again, in the port of Athens. In the meantime, they have been unloaded for a rest. But the strain continues: they have to wait for hours at the port and then have to endure another 16 hours of ferry crossing to Kos. During the waiting time in the port it is extremely hot and there is not a single place of shade for animals on transport. We measure over 45 °C in the sun and not much less in the trucks.

This has terrible consequences for the animals: The bulls suffer enormously from the heat. They breathe fast and heavily, Zoltan pants with open mouth. They sweat and seem apathetic. The water troughs in the trucks are switched off. The ventilators cannot lower the temperature inside – at best they produce at most a small breeze.

Unfortunately we cannot accompany the bulls on the ferry crossing. Only trucks are allowed on the ferry. Thanks to an animal welfare organization in Kos, we find out how the animals are doing after the long journey. As the truck drives off the ferry, the bulls are visibly exhausted and breathe heavily. After another bumpy ride they are unloaded in a stable shortly afterwards. Here they spend a few more months before they are finally killed.

This transport is further evidence that long animal transports must be prohibited – especially in the summer heat. Such massive suffering for the animals during the transports is foreseeable and must be avoided. This is exactly why we continue to be with the animals on the roads – and bring their reality to the air-conditioned offices of the responsible authorities with our documentation and complaints.