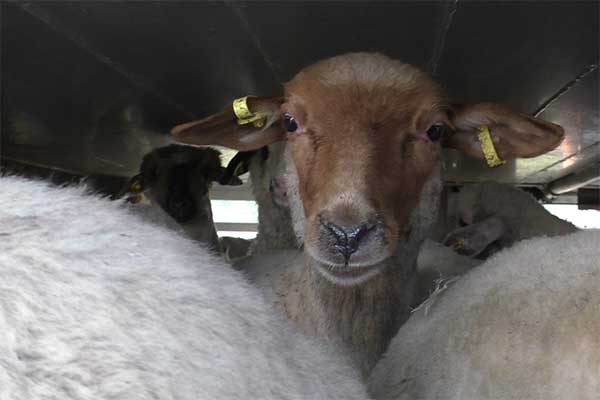 Animals' Angels monitors animal transports during a heat wave in the north of Greece. We meet an old acquaintance - a transporter we have already observed repeatedly - and in whose transport we have repeatedly found the same violations: Too many lambs crammed into four loading decks, in temperatures that are far too high.

We are all the more astonished at the first moment when he now drives across the Romanian border to Greece early in the morning. The temperatures are still mild and the lambs are only loaded on three loading levels - as required by the veterinary offices in Romania since this year. The lambs thus have more space above them, which should allow better air circulation.

But appearances are deceptive. Our faint hope is soon dashed when the truck pulls off the highway and parks on a remote road. The drivers load additional animals at a barn. Meanwhile, the Romanian lambs are squeezed into four loading levels to make room for the new animals. The Romanian order is thus brazenly circumvented, entirely to the suffering of the lambs. They are now standing close together on four loading levels, unable to lift their heads or reach the drinkers, let alone regulate their body temperature. They suffer from enormous heat stress. Not only that, the newly loaded sheep, lambs and goats are not even identified as required by law.

We immediately alert the authorities to have the transport officially inspected. After countless calls, it is stopped by the police at noon. Shortly after, two veterinarians arrive. We describe the events, the control by the authorities is swift. Because at temperatures of 38 °C, the confinement in the vehicle quickly becomes a deadly trap for the animals.

We accompany the animals to their destination and measure up to 40 °C outside temperature. The heat, combined with the confinement, the accumulation of ammonia gases and no access to water, must have been unbearable for Raluca, Barbala and the other animals.

Our complaint has already been written. We are pushing for this transporter to no longer be allowed to transport animals.