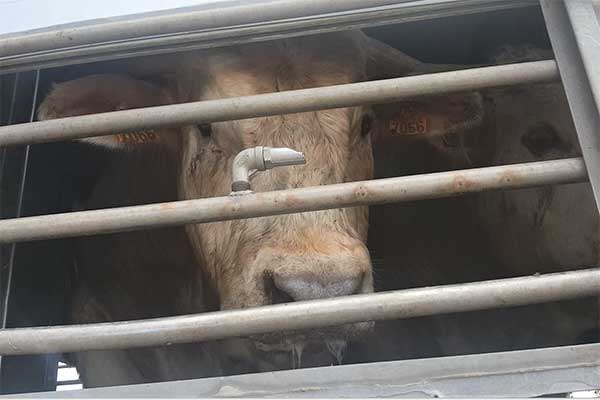 Animals' Angels is in Greece. We are checking to see if animal transports are still taking place despite the scorching temperatures this summer. And yes, the trade in lambs and cattle unfortunately continues. This is because during the summer season, the demand for meat increases due to the numerous tourists. However, one thing has changed compared to previous years (when we filed dozens of complaints): it seems that most of the long animal transports from Romania are planned to arrive in Greece at night to avoid the greatest heat. A relief for the animals, despite everything. Also, all the transports we see adhere to the new rule of transporting the lambs on three floors. This allows better air circulation than when the animals are crammed on four floors.

But much remains to be done. The animals in the trucks are still too crowded. Watering them is an impossibility. The driver of one transport remarks that there are too few drinkers in the trucks. And we notice again and again that the animals do not even recognize the drinkers as such and cannot use them.

Some of the transports still take place during the day in the heat, which makes the already precarious conditions even worse: little space, everyone standing close together and breathing fast. In some cases, the animals cough loudly, they have mucus in their noses, irritated by the acrid ammonia that also stings our eyes when we stand close to the transports.

We see bulls being transported to a Greek island. They are already foaming at the mouth shortly after starting their journey. We accompany lambs to Albania. The transporter is not checked by the Greek authorities when leaving the external EU border, although we had already reported this serious problem to the responsible authorities in Greece in the past.

The small but positive changes we can observe in the four years of our work on the ground encourage us not to give up - despite resistance from the authorities and hostility from the transport companies. Soon we will send a report with our findings to all relevant veterinary authorities.