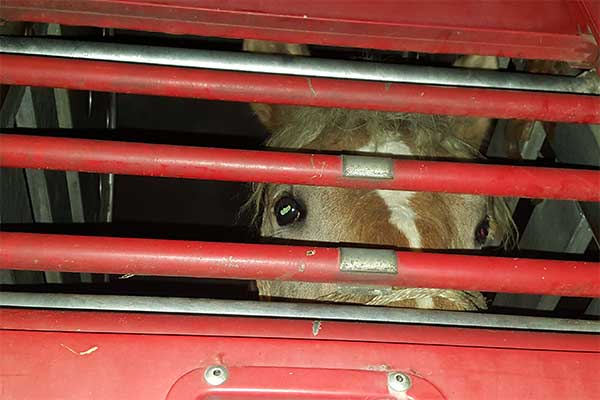 In Italy, Animals' Angels inspects an animal transport with horses. The animals come from Poland. Karol looks at us helplessly through the bars of the truck. The blond horse with the white star on its forehead is nervous. When our eyes meet, he stops pawing with his hooves and calms down a bit.

In Riccione, on the east coast of Italy, we call the police because some of the foals are transported in groups and not in individual stalls. But this way, the animals should not be transported over long distances at all. The transporter claims that the animals would have been so agitated and this would have been the only way to calm them down. Moreover, the truck does not have any suitable watering troughs for the horses. In Croatia, Karol and the others were unloaded for a break. But already after nine hours the journey continued – although the law prescribes a 24 hour break.

Actually the case is clear, but the police officers called in are not familiar with animal transports. Neither is the veterinarian on duty, whom they called in by phone. The officers do not follow up on the information provided by our team regarding the violations. The result: the transport is allowed to continue without penalty.

The official statistics say that animal transports in Europe comply with the law - and with such controls, one quickly understands why such claims are made. But the reality looks different! We have shown this time and again for many years, even if it is often frustrating. We owe it to animals like Karol. We promise not to give up on him and continue to put pressure on the veterinary office. The next day we receive a phone call: The authority has now at least officially recognized and noted the violations of the transporter.