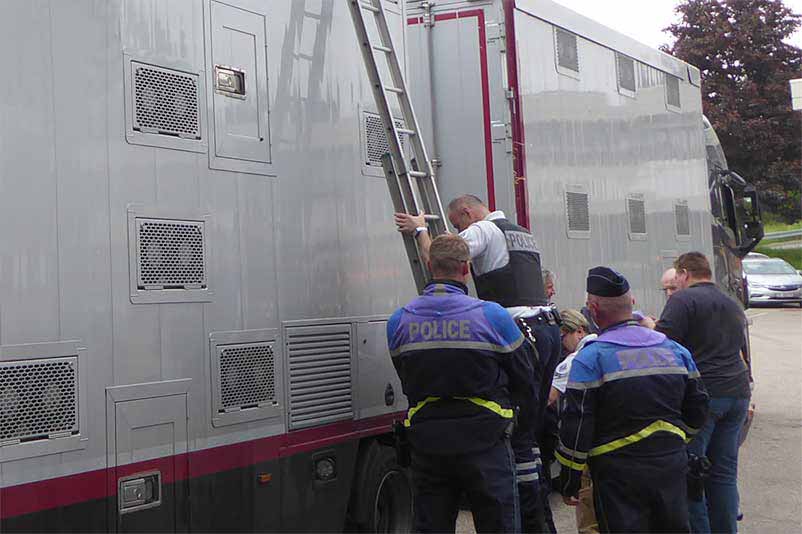 After a lot of theory, questions and lively discussion in the morning, we hit the road in the afternoon where the policemen put the acquired knowledge into practice. The patrols don't have to wait long until an animal transport with calves from Holland passes by. The transporter is escorted to the police station, where we carry out an extensive inspection together. The interest of the officers is immense, and we are pleased that they are now looking at and discussing the theoretical aspects with curiosity and motivation in reality.

The calves are hardly impressed, they have enough straw and space to rest. They are transported from Holland to Spain. If there are no delays on the way, the transport should reach its destination within the permitted transport time for calves. Since the transport documents are also without complaint, the driver can continue the journey.

The transport is as 'good' as the trade with sentient beings can be 'good': All the calves have room to turn around and rest on the clean and thick layer of straw. The drinking troughs are state-of-the-art and very young calves could even be supplied with heated electrolyte solution. A result of the work of Animals' Angels and other organisations?

Of course, we are glad to see that Levin, Max and the other calves don't have to suffer in tight and dirty conditions. But the question remains whether such transports are justified. What awaits the calves after another twelve hours of transport in Spain is uncertain.

In the final discussion we exchange our observations and considerations with the policemen. The remark of some participants – "We have learned a lot today!" – makes us confident that the sensitized police officers will be able to control animal transports more often and competently in the future and help the animals.