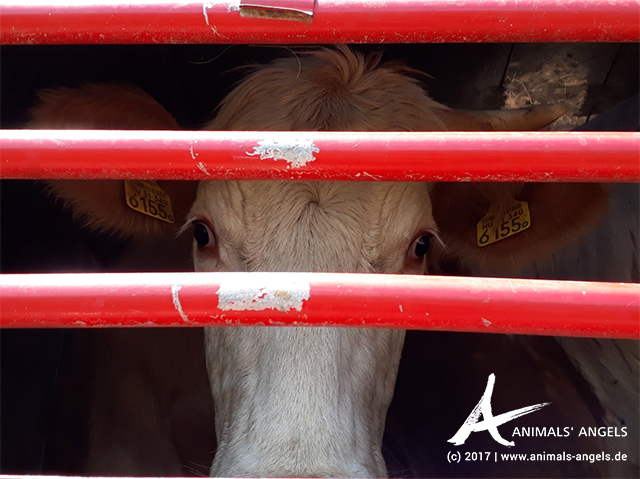 Six years ago, the Turkish borders opened for the import of live animals from the European Union and ever since, Animals’ Angels is regularly on-site to document the horrendous impacts this trade causes for the animals. A large proportion of the animals arriving in Turkey depart in Hungary. Animals’ Angels investigates in Hungary and trails a transport of heifers from the place of departure in Hungary to the place of destination in Turkey.

The heifers are supplied with good bedding material and the truck has additional water devices to provide access for all the animals. But: The planning of a long-distance transport must be realistic, but the situation at the Bulgarian-Turkish border does not allow a realistic planning due to the unforeseeable waiting times at the border and the time needed to clear customs. Even though this transport arrives at the Bulgarian-Turkish border in the afternoon during the office hours, he can only proceed his journey shortly before midnight after more than 9 hours of waiting with the animals on board.

When the journey finally continues, the Bulgarian truck driver is guided by a leading car to find the final place of destination. The leading car then suddenly disappears and miscommunication and lack of organization leads to an unnecessary odyssey through some villages before finally another guiding car leads the truck to the farm.

The sloped compound and location of the farm itself poses another challenge and only after endless discussions and maneuvers the driver manages to position the truck backwards to the stable. The farm is less than 200 km away from the border, but it took seven hours before the animals were finally unloaded – after spending more than 38 hours in total on board the truck and crossing four countries.

This case is another example of the unpredictability of long-distance transports and that transports are still authorized without a proper check of the necessary documents. In this instance, the accompanying documents did not indicate a specific destination but only a region of Turkey.