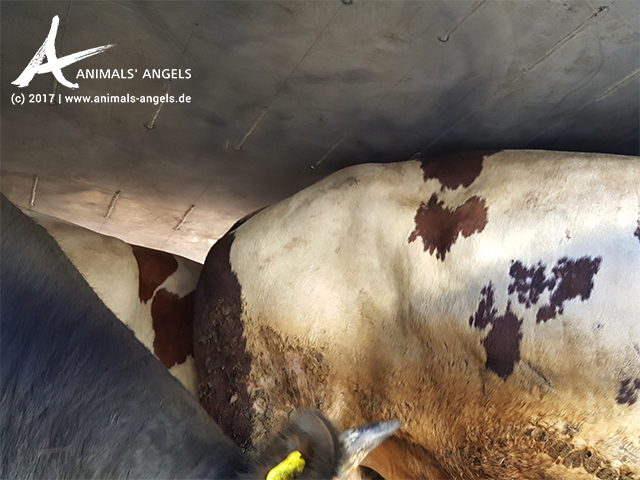 At customs near the Bulgarian-Turkish border, Animals‘ Angels inspects two transports with bulls coming from Romania destined to a slaughterhouse in Turkey.

Already in the morning the weather is hot with nearly 30 °C. While the drivers are organizing the document for exportation, they do not even bother to turn on the water and ventilation system for the animals. They suffer from the high temperatures. As there is nearly no bedding inside the vehicle, added to the heat is a strong smell of ammonia which further discomforts the animals.

The animals’ situation is worsened by the lack of ceiling height compromising air circulation and preventing the animals from lifting their heads.

Some of the animals have large scars. In case of Finn and Sascha, the stitches are still visible.

These transports are once again an example of absolute negligence and ruthlessness towards animals. Animal suffering is inevitable during long distance transports – but hence, in particular, carriers and veterinarians should spare no effort to reduce suffering and stress wherever possible.  But, once again, they failed: due to ignorance, convenience and greed.

Animals’ Angels has contacted the involved authorities and carrier.