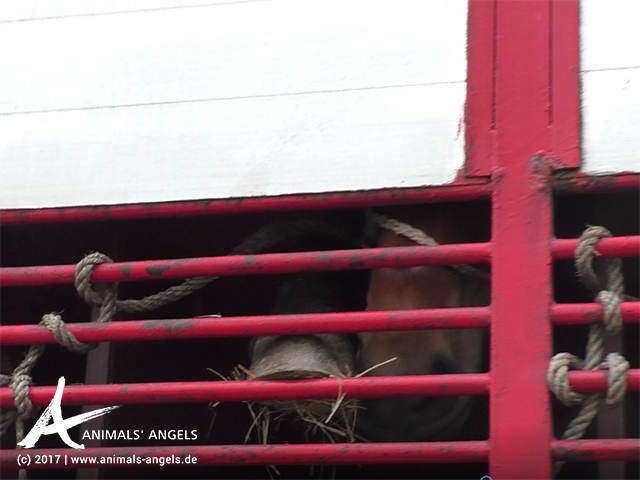 A team of Animals´ Angels monitors the western and eastern borders of Italy where animals arrive in trucks coming from Spain, France and Eastern Europe.

The majority coming from the west are cattle destined for slaughter or further fattening in Northern Italy. They travel mostly in the night time and many of the vehicles look overcrowded, especially those with heavy bulls.

We look for horses knowing that the number of the transports considerably decreased in the last ten years since Regulation EC No. 1/2005 came into force. But even though they still are imported by Italy, we do not find them on the western border.

However, we find a transport of horses at the opposite border, coming from Poland. It looks exactly like the ones observed in the past. The horses are tied with ropes to the slats of the openings, which is considered legal if they can move their head up and down. But we cannot find any water supply. Horses should be watered every 4.5 hours to not risk dehydration, especially on long distance transport or when they are a bit overweight.

They go to South Italy, to Calabria, and the route requires more time than allowed by law. They travel in single stalls but some do not even have space around their body for air circulation, touching both the dividers. They sweat and show signs of frustration. Some repeatedly paw the ground and the truck’s side railings. They neigh and we cannot avoid to see their exasperation for being restrained in such limited space for more than an entire day.

We ask the Polish and Italian veterinary authorities to investigate in the case as well as this route which by law, is too long if a 24 hours rest is not carried out in between. Long distance horse transport might be the only ones declining in frequency, but still these animals face enormous distances just to be slaughtered.