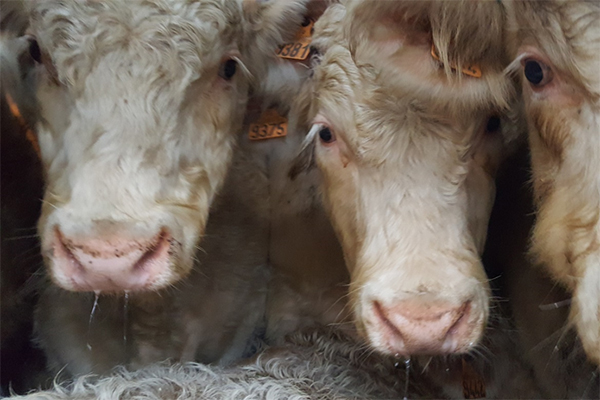 A team from Animals' Angels is waiting for animal transports at the border between Italy and France. After a cold night of waiting in the car at 2 o'clock in the morning a transporter passes by. The last two nights we checked several transports here, now we want to follow one to Italy.

The truck drives through the whole night. While overtaking we can see that young cattle stand close to each other on two loading levels. In the morning the truck finally stops at a gas station and we can see the animals.

The transport is crowded. Some cattle are lying, but the others are partly standing above them. There is not enough space for everyone to lie down and rest. Also the metal floor is hardly covered with bedding and is therefore certainly not a comfortable lying surface.

Linus quickly attracts our attention - he looks particularly exhausted. He keeps his head constantly lowered, we don't know whether due to lack of space or exhaustion. Maybe a combination of both.

While we look for the animals, a police car stops next to us. When the officers see us and the transporter, they immediately start an inspection. The check soon turns out to be very comprehensive - it takes over six hours. Three official veterinarians are called in. The transporter is escorted to a scale and to the veterinary office.

Unfortunately, we are not allowed to be there until the end, but we have already requested the results of the inspection. The duration of the inspection is problematic for the animals, as they have to wait on the transporter during this time. For us the duration is not plausible. All the more reason for us to hope that its outcome will have preventive consequences.