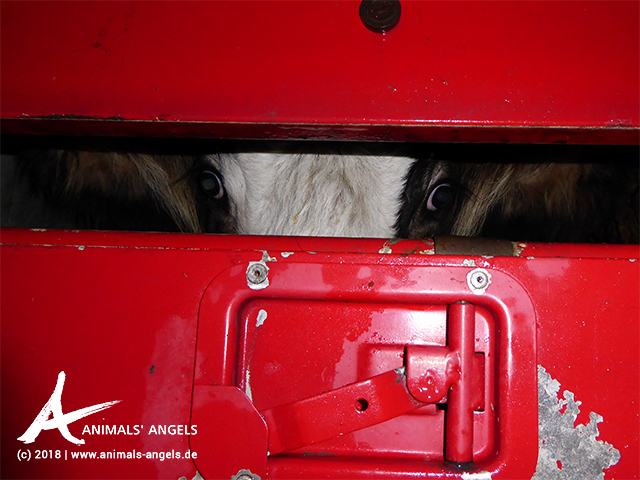 Animals‘ Angels is at the border between Romania and Bulgaria to monitor the export of live animals transported in the EU and to third countries. We notice a Bulgarian truck and decide to follow. It's starting to dawn. The truck gives us an uncomfortable feeling at first glance, more than other trucks, maybe because it is old and dirty. We hope that he will stop at the next gas station so that we can have a look at the animals, but unfortunately, our hope is not fulfilled.

Therefore, we hope for the truck to be stopped at the police check point we noticed earlier further down the road. As we get there, the police officer seems to want to stop our truck, but then he suddenly changes his mind and lets him pass. In the past, we heard some truck drivers complain about the Romanian and Bulgarian authorities for not stopping and inspecting local transport companies. Maybe this is the case here, too. We are disappointed, but cannot call the police until we were able to inspect the truck and see if it was just a feeling or if he really violates the law.

After a while, the truck finally stops. The outer wall is smeared with feces. The cattle inside are a sad sight. Deniza is the first animal we spot. She is tied with a short rope to the side rails and thus unable to drink or lie down. The animals have no bedding and the floor is full of feces. Their backs and flanks are crusted with dirt, meaning they were also kept in the dirt at the farm of origin.

We try to talk to the driver and find out that the animals come from Romania and are going to a farm in Greece. According to our calculation, this counts as long distance transport, taking approximately 12 hours. When the driver opens the flaps, we can see other cattle tied shortly like Deniza. There is also a loose smaller calf, but it is too dark and the density too high to see enough. After a break of 15 minutes the driver continues his journey.

The transport does not meet any basic requirements of the EU regulation on animal transport. Animals must not travel for 12 hours while being tied this shortly, preventing them to move, to reach the water devices or lie down to rest. We alert the veterinary authority in Greece to inform it about this terrible case, and to demand to check the truck and take appropriate measures. The full report is in process to be sent to all competent authorities, asking that such transports find an end.