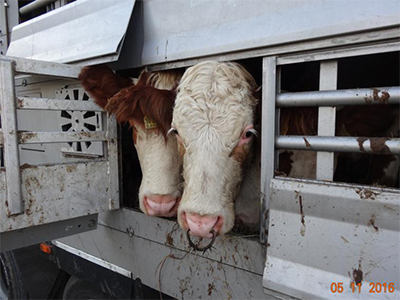 Animals’ Angels is again with the animals transported over long distance on the route from EU to Turkey. This time, the Animals’ Angels team is waiting already at the Hungarian-Romanian border to reveal violations of the existing transport regulation already within the EU in order to increase pressure on the competent authorities.

The EU Commission and the competent authorities of the member states often use as an excuse for being inactive that they would have no influence on what is happening to the animals outside EU territory. This we we want to disprove. It is within their competence, also acc. to ECJ-ruling C-424/13 from 2015, to assure that the entire transport, from beginning to end, complies with Regulation 1/2005, no matter whether the final destination is within the EU or in a third country!

The problems already start in the very beginning, namely with the planning of such long journeys. Too often they are unrealistic, do not include the well-known long waiting times at customs, the required breaks for the drivers and/or the obligatory resting times for the animals. At worst there is no planning at all for such long transports, even so they have been approved by the competent veterinary authority.

Even when the planning appears to be good and, e. g., includes average waiting times, reality is different. Just to mention an example: Our investigators trailed a truck with German heifers (one-year-old female cattle) from Hungary to Turkey. The planning approved by the veterinary officer in Germany included obligatory rests and average waiting time at customs. But in reality, monitoring the truck, Animals´ Angels found that the heifers were reloaded a few hours before the minimum obligatory resting time. Those heifers, in delicate state, remained confined in the truck for nearly two days before reaching the final destination in Turkey.

This transport is again an example that – even with proper planning – such long journeys cannot comply with the requirements of Regulation (EC) No 1/2005 on the protection of animals during transport! We wonder whether the farmers, before sending ‚their animals' on such long journeys, have ever asked themselves what is going to happen to them.

Animals’ Angels will take further measures and file a complaint to the competent authorities.