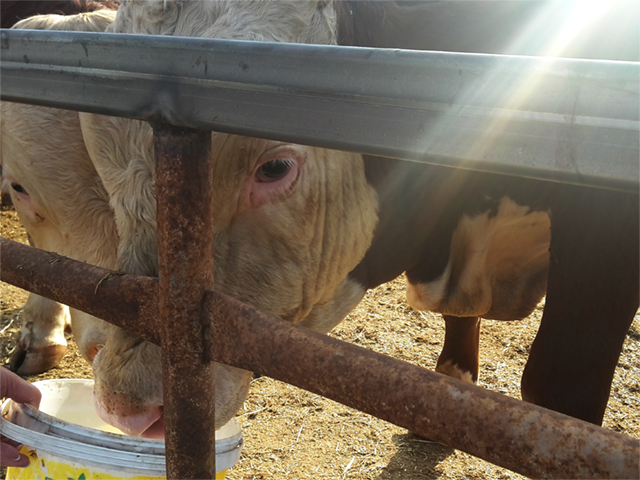 Animals' Angels is again at Kapikule at the Turkish side of the EU's external border where a new provisory stable was build. It has four outdoor-paddocks which offer no protection from the sun. A maximum of four trucks can be unloaded here at once.

The stable’s manager tells our team that the animals are normally unloaded for two to three hours to receive feed and water. Two days ago, four trucks with Czech 'slaughter' bulls have arrived that should have directly went to a slaughterhouse near Istanbul. But due to the Turkish festival of sacrifice being celebrated, Turkish customs is not operating and hence the animals have to stay here for now. At this stage it is still uncertain when customs will resume operations and release the transport documents.

During unloading of one of the trucks, Animals' Angels spots Janoš who is the last to walk off the trailer. Neither the drivers nor the workers have examined him – which would have been necessary as Janoš is lame on all four legs and tries to avoid any unnecessary movements and seems apathetic.  After giving him some water, the Animals' Angels team tries to contact a veterinarian. But no one is responsible and due to the festive period all veterinary offices are closed.  As Janoš seems to be unfit for transport, Animals' Angels also informs the transport company. If Janoš should really be assessed as unfit for transport, of course the question would be what should happen with him. But this question is put aside as the transport company and the buyer decide as expected: Janoš is loaded onto the truck again to be transported to the slaughterhouse.

We don't know what would have been the best decision for Janoš in this situation – whether he would have opted to stay alone in the stable to avoid the exertions of being transported, or whether he, despite his lameness, would have opted to board the truck together with his herd. He didn't have a choice. But what Janoš' case confirms for us, once again, is that at the Turkish border it is impossible to ensure suitable emergency measures and corresponding medical care for animals in need.

Animals' Angels will file a complaint to the competent authorities and continue to take a stand on EU level for the abolition of long distance transports.