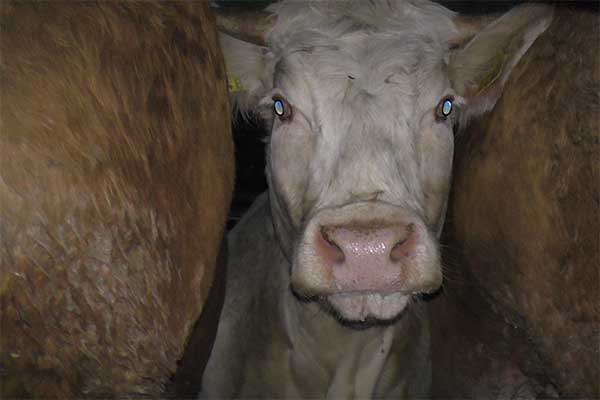 In Italy we inspect numerous animal transports. We come across transports with both 'breeding' and 'slaughter' animals.

In one transport we find Bella, Kathi and Hilde. Together with 87 other pigs from Germany, they are transported from the Czech Republic via Italy to Greece. They are so-called 'breeding' animals. The driver explains to us that each animal is worth about 4.500 Euro. According to planning, with two rests, their transport takes about five days. Far too long, we think! Because such long animal transports are always a great risk for the animals – we thus reject them vehemently. But at least they have enough space. They are clean and stand and lie on fresh bedding. And from a reliable source we learn that the subsequent 24-hour break was indeed observed.

However, the heifers on a transport from Slovenia to Italy are treated quite differently. Magda, Kasia, Ema and the others originally come from Czechia, Poland and Latvia. They are to be slaughtered in Italy. We find their transporter in a parking lot by the highway. While the TV is running in the driver's cabin, the animals in the back of the truck are trying to keep their balance. They have not enough room. In the crowdedness they push each other around and prick each other with their long horns. The heifers seem restless, their fur is damp. They are dirty and stand in a mud of their own excrement.