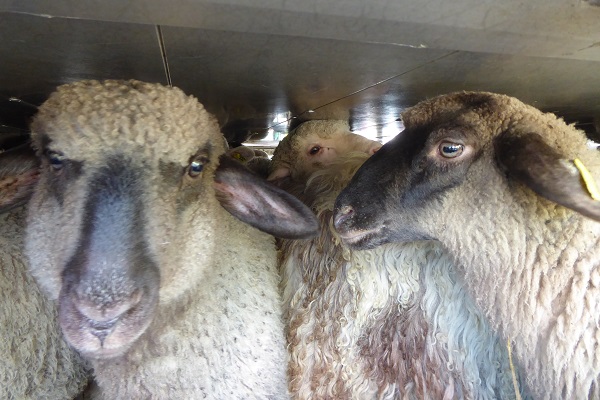 During our investigation in Romania we find lamb Ionut inside an animal transport. He lies on the wet, dirty ground, breathing heavily and being trampled by the other lambs. We alert the driver who should regularly check the condition of all animals – which is impossible in view of the large number of animals on board, as not every single lamb can be seen in the crowd.

The driver tries to get Ionut on its feet, but Ionut is too weak and cannot stand. He should immediately receive first aid and be unloaded. We accompany Ionut and repeatedly try to organise an official veterinarian to check the transport, but in vain. Only at the destination, the veterinarian responsible for the slaughterhouse is supposed to carry out an animal welfare check. However, as we do not have access to the slaughterhouse, we draw the slaughterhouse operator's attention to Ionut and other transport problems: Too many animals are loaded on the truck and many animals hit the ceiling with their heads due to the low height. In addition, the bedding is very dirty, and since we could not see all the animals, it cannot be ruled out that other lambs may be sick or injured.

We wait outside until all the lambs have been unloaded. According to the slaughterhouse operator, all of the animals are well – but our observations of Ionut show the opposite. We will make an official request to obtain the results of the veterinarian's check.