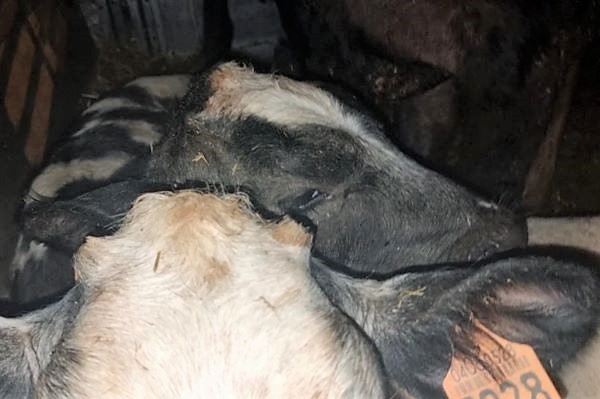 Animals' Angels is in the port of Las Palmas de Gran Canaria. We are waiting for a transport of Spanish calves. Anna, Nadia and Magda are three of the 111 calves on board the transport, which is brought by ferry from Cadiz, southern Spain.

In Cadiz, before the crossing, we had the opportunity to see the animals on board the truck and talk to the driver. The conditions of the transport are poor. The bedding material is already dirty and wet. The animals are all covered with their own urine and excrement. The loading density is high and the animals cannot lie down and rest at the same time. The calf Anna looks very tired, with her head on the ground and her eyes closed; she can hardly move or lift her head. Here in the port, the animals have to wait more than an additional 14 hours on board the truck before it can board the ferry and cross to the Canary Islands.

At the farm we are told that we are not allowed to approach the truck and can only watch the unloading from a distance. The animals are happy that they finally have space and can move freely. Anna is also unloaded, desperately looking for water and food like the others.

But the unloading is not finished yet: one animal is still on board the truck. We too are now near the truck. We see the calf, Magda, lying there with her eyes closed and her belly bloated, barely breathing. We don't know how many hours she has been in this position. The driver washes her head with water and fortunately she is able to drink some water. However, she still has difficulty breathing. After a few minutes, the workers and the owner open her mouth and put a wooden stick inside. This stick has a hole through which they push a tube that reaches Magda's stomach so that the air can escape from it, as the workers tell us.

Then the workers look for a rope to pull Anna out of the truck. We interfere and ask them to just let Magda rest for a while. Again we are asked to leave the yard and not to disturb the work. In the end, Magda is able to gather her strength and manages to get up and walk out of the truck on her own two feet.

Finally, the owner and the driver ask us to leave the farm for the third time. However, after 2 hours we are back at the farm to look at Magda's situation. Fortunately, we can see that she is still alive and housed in a secluded area with shade and water.

This transport is another graphic example of what happens to animals when they are transported non-stop aboard trucks for at least three days. We are now preparing a comprehensive complaint against this and other transports to the relevant authorities in Spain in order to finally put an end to these unnecessarily long transports.