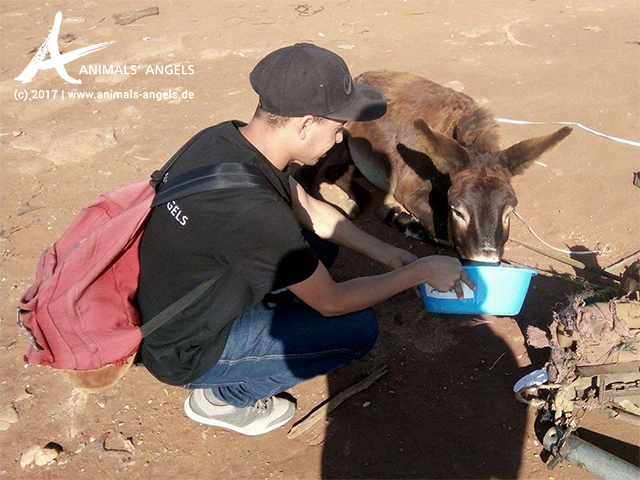 Our Animals‘ Angels team in Morocco visits Mers El Kheir market. They give water to the ‘working animals’, supported by Houssam, a young boy from the neighborhood. They treat some wounds and show the animals some love and affection which they get so rarely here.

During their inspection of the market, Habib and Boubkar find donkey Ricky. He is so exhausted that he had to lie down. Luckily, this time he can do so because his owner Aicha has freed him from his cart. She hasn’t done this ever before and thus Ricky normally had to wait all day being attached to his cart. Our team has been talking to her repeatedly, telling her how important it is for Ricky to take a break. Hopefully, she has understood it for good now.

Next, our team meets a donkey pulling a severely overloaded cart. Habib and Boubkar already know him. They treated a wound caused by a rope used to tie his front legs. But his owner does not listen to our team and reacts very unapproachable. But at least, Habib and Boubaker treat his wounds which luckily have already healed well.